I thought I was being a little premature in already thinking about next year’s growing season but having asked around on Twitter it appears not… I think the gloomy July weather has us all day dreaming. Personally pumpkins are on my mind a lot right now, specifically the genetics of the seeds that will be inside the fruits I shall harvest this coming Autumn. At my allotment I have grown over ten types of squash and pumpkins this year and that makes the seed offspring situation somewhat complex and I’ll explain why.

What this all means is that unless you have controlled the pollination of the flowers yourself by hand (using small bags or nets to keep bees and other pollinators away from male AND female flowers) then you really have no idea what to expect from this year’s squash and pumpkin seeds if you sow them next year. It’s a lottery, it’s a gamble and I don’t know about you but for all the effort I put in at the allotment I don’t want to gamble!

There is another complication too… hybridisation

Pumpkins and squash are members of the Cucurbita species, a species of plants originally from the Americas, domesticated by humans around 10,000 years ago and brought to Europe by ancient explorers. The Cucurbita species includes pumpkins, squash, courgettes and gourds and there are five families: 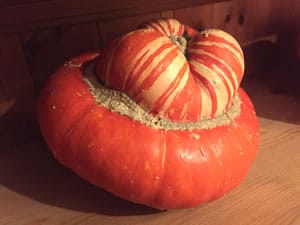 In Europe most of the seeds available to us today reside within three of these families; Maxima, Pepo, and Moschata. What’s important to know is that squash and pumpkins within each of the Cucurbit families can cross with each other to pollinate and produce hybrid squash next season; A courgette plant for example could cross with a Connecticut Field pumpkin as they are both members of the Cucurbit Pepo family. The offspring might be a pumpkin sized courgette or it could be orange round courgettes. They would still be edible of course but not suitable for showing. Cucurbit plants cannot hybridise with other Cucurbit families (Maxima to Pepo for example) so you could grow one member of each family and be a lot more assured of the next generation’s seed genetics.

In my own case I have several members of all three of these Cucurbit families growing on my plot, the bees are largely open pollinating them. My neighbours are also growing many varieties of squash and pumpkins and bees can travel two miles! Therefore the seeds I harvest in the Autumn will have a high degree of hybridisation or inbreeding which in essence is a low degree of reliability. As our annual squash and pumpkin show chief Richard likes to label them… ‘mystery squash’. 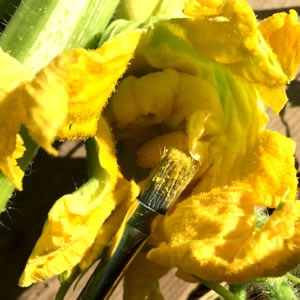 There are only two exceptions for me:

Below is a list of the three main squash and pumpkin Cucurbit families, their more well-known varieties and whether I have grown them this year. Any of the potential varieties labelled ‘grown’ could have been hybrid pollinated by the bees on my behalf, so I won’t be reusing any of those seeds next year (aside from the aforementioned hand pollinated ones).

I do quite fancy the idea of crossing an Atlantic Giant with a Turks Turban to create a Giant Turban hybrid but it would take a good decade to do with genetic reliability.

I have translated a 700 year old guide to growing pumpkins and squash, it included some interesting tips on picking the seeds from inside a pumpkin for storage, – see my pumpkin growing translation from the Ruralia Commoda.

You may also like two other related articles I have written:
How to grow giant pumpkins – my tips for success
Buying Seeds – F1? Hybrid? Heritage? Does it matter?