You are at:Home»Health & Outdoors»Pumpkins, Squash & Gourds: Medieval Grow Your Own 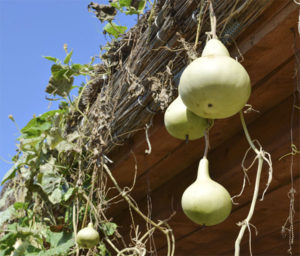 It is highly unlikely that the cucurbits described in the Ruralia Commoda of 1306 were anything like the pumpkins we know today, since those came from a central American continent not yet discovered. Instead the people of that time would have eaten courgettes or gourds, possibly ‘Calabash’ (the bottle gourd which has origins in Asia and is know to have been cultivated by the Romans). It certainly better matches the wood carved illustration better (compare the photo on the right with the illustration inside the translated text). However, these growing tips seem just as valid for pumpkins in my experience, so the techniques are perfectly applicable to pumpkins and squash of all varieties today:

Before sowing, put cucurbit seeds for one night in a pot full of water, throwing away those seeds that come afloat and planting those that sink. Cucurbits desire well worked, manured and moist earth. In the place where they are put, mix earth and manure. They should be sown at the end of April and at the beginning of May, distanced three or four feet from each other, in this way: sow two seeds together, about three fingers deep inside the earth, so that the roots stay underneath and the plant above. 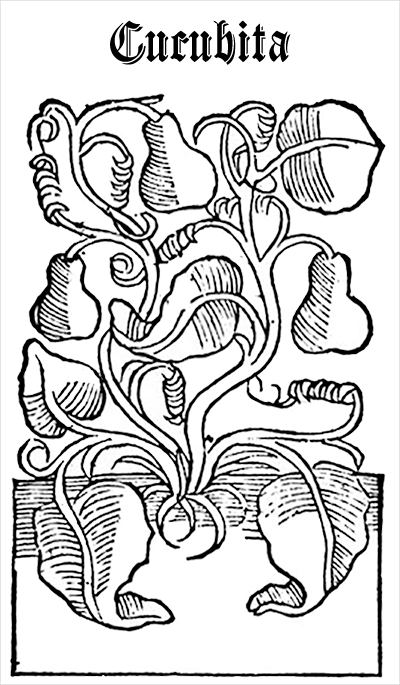 They should not be planted in ditches otherwise rain can gather around them destroying the sprout. Once they are born [germinated] and are well out of the ground, they shall be hoed, and earth must be put around them [like with potatoes], and when it is necessary, you shall water them well. If they are planted in poorly trenched and worked earth, once they start to grow deeply loosen all the earth from around them, so that they can extend their roots throughout all spaces.

Once grown, make a vineyard-like covering on top that is of the height of a man, and put leafed branches on top for shade. And when the heat is excessive, put herbs on these cucurbits so that they can grow better [could be early companion planting or just shading using herb plants], or bury its vines in the earth. It will be very useful for it to produce more fruits and sooner if you cut the ends of the longest vines, so that they will produce branches that will produce fruits.

Also, a way has been found in which to plant cucurbits and melons more rapidly and to have their fruits sooner, which is: put some pounded earth on a large mass of steaming hot manure, which should be taken from the stables in the month of March. Plant seeds on this aforementioned earth, as they will be born soon thanks to the hot smoke of the manure.

Once they are born [germinated], they must be protected from the dew of the night [frost] with some covering. And when dew will have stopped falling, transplant them immediately, along with a little of that earth and manure, to the place where you want them to grow.

The fruits that are storable shall be the biggest ones that are born on the plant first; these must be left hardening on the vine until winter, and then they must be hung over a little smoke, and they will be stored optimally.

Know that the size of the stalk connecting to the fruit tells you in advance what the fruit’s size will be [when planting the seeds inside]. When you want to plant out the seeds, open the fruit and take the seeds; and know that the higher the place in which the pumpkin seeds will be, the longer the pumpkin seeds will store for. Seeds stored in the aforementioned way can be stored for three years. [possibly better quality seeds for planting out too]

Pumpkins, squash and gourds are cold and moist in the second degree [anti-inflammatory] and generate phlegmatic humor [one of the essential bodily fluids believed to exist then], it is therefore good for those who are of a hot nature, and in particular to cholerics or those who are warmed up accidentally; in fact, it mitigates their heat and extinguishes thirst, and it is optimum for them especially if given with quince or pomegranate juice, or with verjuice or pomegranate vinegar. To phlegmatics [idle and stubborn people], it must be given with pepper, mustard or mint.

If it is roasted rolled up in dough, the juice that will be found inside fruit shall be given to drink to someone that is feverish, it will mitigate the heat of the fever and will extinguish thirst. In acute fevers, give its water or a syrup made out of it. Cucurbit cooked with meat during summertime is useful for cholerics. Its seeds are cold and diuretic for the fineness of its substance and are particularly good as medicine: against the obstruction of liver, kidneys, bladder and against chest asposteme, take its cleansed seeds, pound them well, cook them enough in barley water, and once strained give it to the infirm. In the case the infirm could not drink this water, make a syrup out of it, and give that. And note that they will be more effective if they are not boiled, but are made suitable at a moderate temperature.

Some interesting information there from ancient history and as a pumpkin and squash growing fanatic some points that are still valid and used today (indeed most quoted in my modern article about growing giant pumpkins):

A couple of points that need further investigation and testing: