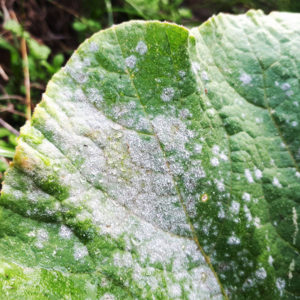 As we approach the end of summer and move into autumn you should not be too surprised to see your pumpkin and squash plants starting to look a little worse for wear. I started mine in April, planting them out in May, by now their vines harbour well developed fruits that are swollen and beginning to ripen. The plants themselves are mostly focusing available resources on seed development (inside their fruits) at the expense of maintaining or adding lush green foliage. With this shift in focus towards reproduction the plant’s immunity weakens and leaves are much more likely to dry out, die back and often develop powdery mildew (Podosphaera xanthii).

When you see the state of pumpkin plants in their end cycle you’d be forgiven for thinking that it was something you have done wrong but that is probably not the case. You can certainly reduce the likelihood of powdery mildew developing on plants by limiting watering to roots rather than leaves but eventually, just like tomato blight, it comes to us all with high humidity, darker days and the end of the plant’s life. I grow A LOT of squash for our local pumpkin show each year here in Dorking but I have never yet seen a year when the plants didn’t eventually succumb to powdery mildew near the end of the growing season. 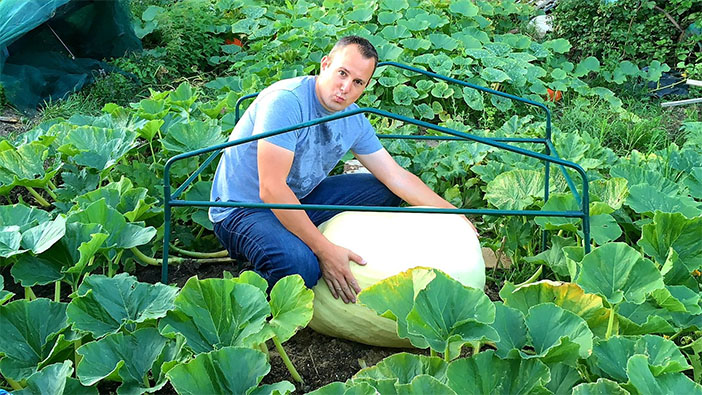 I need to keep powdery mildew away from my giant pumpkin plant!

If at the end of August you still have developing pumpkins and squashes or, like me you’re growing a giant pumpkin (195lbs and counting), you might want to extend the life of the plant by ensuring that the leaves maximise photosynthesis and maintain fruit growth. Reducing the appearance of powdery mildew helps a lot and there are a couple of things you can do to help bolster your plants’ defences. These methods won’t work as well to treat existing mildew on leaves (those leaves should be cut off and carefully discarded) but they will help prevent powdery mildew from developing in the first place.

In 1999 Wagner Bettiol at the Brazilian Agricultural Research Corporation was looking for alternatives to fungicides which were used to treat powdery mildew (a fungus) on courgettes and squashes. There were concerns that fungicides were becoming ineffective due to increasing resistance whilst also posing an environmental risk. Through his research Bettiol discovered that applying a foliar spray of milk to leaves twice a week, with a mixture of one part cow’s milk to nine parts water was at least as good at preventing mildew as the known chemical fungicides. The reason milk works is that it contains Lactoferrin which is an antimicrobial component of milk. Bettiol also discovered that a mix stronger than 30% milk had a risk of producing phytotoxicity in plants (growth limiting). Despite the phytotoxicity risk I spray a 40% full fat organic milk solution on to my giant pumpkin plant leaves with no ill effect. Yes that costs me £1.80 for 2.5 litres but it’s for a good cause. In addition I like to think of all that lovely calcium, perhaps the plants will absorb that too and grow fatter pumpkins! 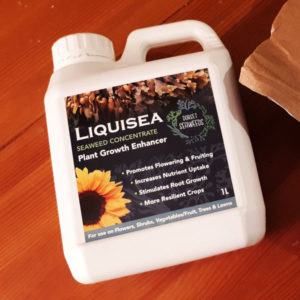 I have written about the many benefits of seaweed for plant growth before so won’t go into too much detail again other than to say that seaweed contains metabolites which like milk have anti-microbial and anti-fungal properties. A foliar spray of liquid seaweed once a week should help to boost plant health and prevent the spread of powdery mildew. I use Liquisea (available from Dorset Seaweeds) or Maxicrop (available at your local garden centre).

I recommend spraying pumpkin leaves with a seaweed solution first, because that has many benefits which exceed the anti-fungal properties and makes for stronger plants and better crops. Ten days later spray leaves with milk. It is important not to depend on any one preventative anti-fungal solution to minimise the development of powdery mildew resistance.

I’ve also heard of a couple of other prevention and treatment methods – baking powder is extremely alkaline with a high pH and supposedly kills the Podosphaera xanthii fungus on contact. I don’t like the idea of putting a high pH spray on my pumpkins though. A garlic spray is another idea because garlic contains sulphur – I’ve never had any luck with that method though so prefer to use milk and liquid seaweed. 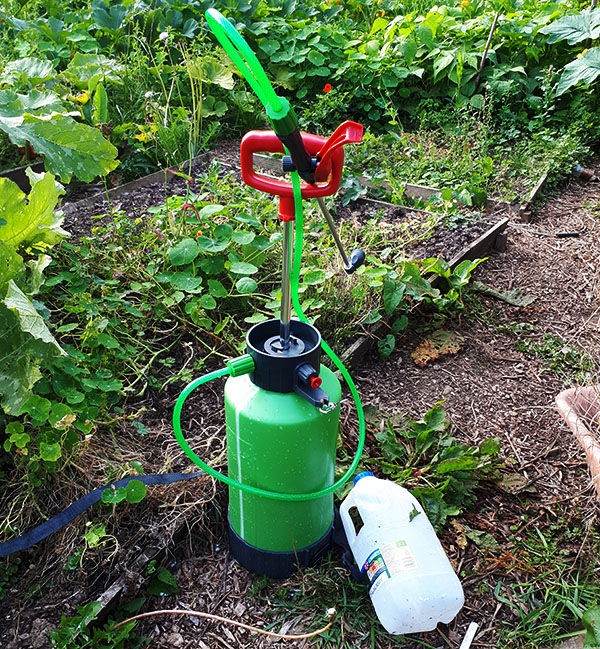 Be sure to clean your sprayer thoroughly after using milk.

[2] Lactoferrin (an antimicrobial component of milk) The results support the hypothesis that free radical production and the action of lactoferrin are associated with the control of powdery mildew by milk.