Looking for grow your own tips? These ones are between one and two thousand years old, passed on from the ancient Greeks, Romans and Persians. They were collated in 1306 by an Italian called Pietro Crescenzi in his book, the Ruralia Commoda. These tips have been translated into modern day English from Latin and Italian exclusively for Grow Like Grandad. If you’d like to know more about the background to this translation project see here. My own garlic tips are available here.
[Note. my comments are displayed in red below] 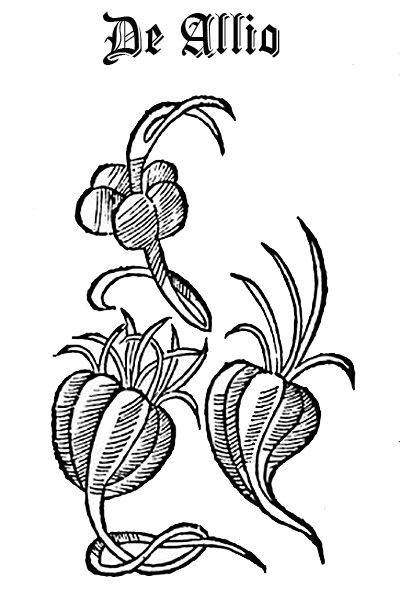 Garlic is optimally sown in the month of November, in particular in white earth [chalk, well drained], trenched and worked without manure, although it also arises in manured earth. It can also be sown in the months of September and October, and in the month of December. Once ripe, if they are left in the earth, their roots and leaves renew themselves, making seed that can be sown the following year, and produce garlic. [Not clear whether they are leaving partial cloves behind and/or taking seed from the flower head or both!]

If you want it to have big heads, when it starts to be born [germinate], tread its stem from afar, so that its juice will come back to it [squash the stem beneath the scape / flower head, forcing the stem juice back down?]. They are harvested when their stem cannot hold up anymore, in the absence of moon and in clear weather: because they say that, if they are sown when the moon is underground [a new moon… because the earth was believed flat it was ‘underground’], and are uprooted when the moon is also underground, they will not have a bad smell. Also, if put in the straw or hung in the smoke, they will last [store well].

Garlic is hot and dry in the middle of the fourth degree [Raises Blisters, Treat Cancers]. It has the virtues of consuming and dissolving, and of driving venom away. Against the bite of poisonous animals, take the garlic, pound it and smear it on top [of the bite wound]. The juice that is received inside drives poison away, this is why garlic is called “the farmers’ theriaca” [an ancient greek antidote]. Against worms, take garlic and a bit of pepper, vinegar, as well as parsley and mint juice, make a sauce out of them, and dip in it bread or meat.

In order to open the tracts of the liver and of the urinary meatus [penis], make a sauce with the garlic along with wine and the juice of diuretic herbs, and give it to the patient. Against strangury [bladder irritation] and dysentery and the pain of the hip, take garlic cloves and cook them in wine and oil, make a poultice and put it on the pubic hair, around the penis and on the aching places. When taken exceedingly, garlic is harmful to sight because it dehydrates [being hot and dry] and harms the whole body because it generates leprosy, apoplexy, mania and a lot of other things.

Avicenna [Persian mathematician] also says that cooked garlic clears one’s voice and throat, and is useful for old coughs and for chest pains due to cold. Isaac [son of Abraham] says that garlic gives poor nourishment and is harmful to cholerics [independent, decisive people] as well as those who have a strong natural heat. In cold and moist types, they stimulate urine and moisturise the belly, whilst they do the opposite to those who are dry by nature; however, in order to avoid the damage given by their heat, they shall simmer them twice and then dress them with vinegar.