Wildflower meadow planting looks naturally stunning, the mixed flower displays continue for a longer period of time and they are also great for pollinators such as bees and butterflies. I have been terracing our hillside back garden for the past 9 months, this has involved much soil relocation on my part and I realised that this provided me with the perfect opportunity to sow a wild meadow area because wildflowers don’t like fertile soil. In removing a large volume of top soil from my third terrace I had only low fertility soil left behind.

I should say that MrsGrow wasn’t too keen on the wild meadow idea and she would much rather I had turfed terrace number three immediately. However, in order to do that I needed to build another permanent wall – and that had budget implications which could not be addressed at the time. Since the garden is my domain (and MrsGrow’s is the house) I politely told MrsGrow that a wild meadow was going to be planted for 2017 and that she’d have to learn to live with it!

I have attended many garden design study days this year and seen both James Alexander Sinclair and Nigel Dunnett (of Olympic Park fame) present on the topic of garden design and wildflower planting. Nigel Dunnett appeared at the Gardens Illustrated Festival and it was here that he introduced me to the idea of mixed perennial and wildflower planting. Essentially this involves planting perennials into a wildflower area in a random naturalistic way prior to sowing the wildflower seed around them.

The mixed planting concept is really something of an extension of the planting style I have been learning at Great Dixter with Fergus Garett; the idea that plant species can be mixed to create interesting floral and structural displays, flowering in succession, and that there are no real rules that forbid any combination if it looks effective (and the plants are suited to the location). 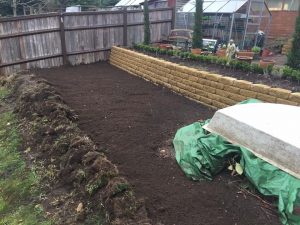 In March I prepared my wildflower terrace area by raking the poor sandy soil that remained and adding a few wheelbarrow loads of low fertility soil from elsewhere in the garden. I also had a bonfire on this spot to dispose of some large amounts of wood, the ash was raked across the bed and mixed with the sandy soil: 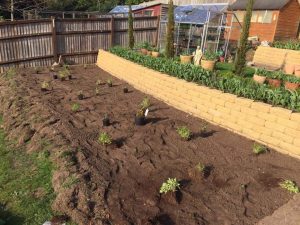 Next I planted some perennials into compost-filled holes within the new bed (because perennials do need fertilised soil). It is important not to plant out the perennials in rows, but in groups of two or three plants that might look less formal and more naturalistic: 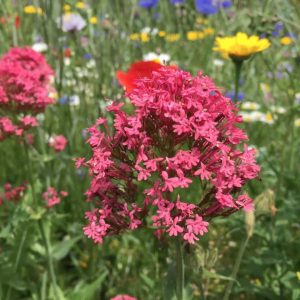 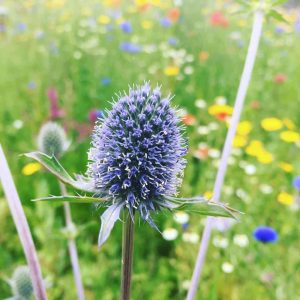 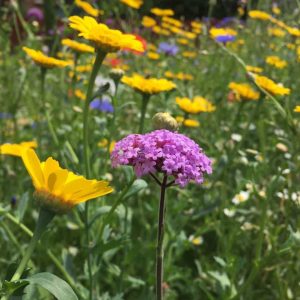 The next step was sowing the wildflower seeds, this was fun and I involved the children in this task, it was simply a case of spreading the seeds evenly across the planting area (which in my case measured 18 square metres). I used three combinations of seed from three different suppliers:
1. Boston Seeds ‘BS3 Dry Sandy Loam Soils’ – See http://www.bostonseeds.com/
2. Thompson & Morgan ‘Cornfield Mixture’ – See https://www.thompson-morgan.com
3. Seedballs ‘Poppy’ and ‘Butterfly Mix’ – See https://www.seedball.co.uk 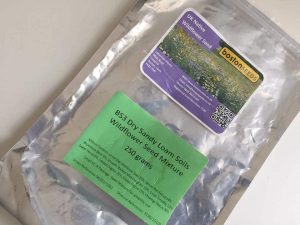 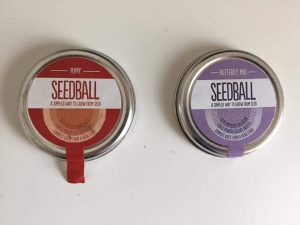 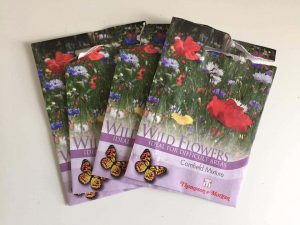 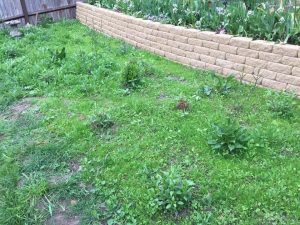 It took around a month for the seeds to start to germinate fully. I had to weed the wildflower seedings of the existing weeds that already make their home in our garden. I’m sure the neighbours thought I was quite mad to be picking weeds… out of what would have looked to them like more weeds! It was necessary though because I wanted to give the new wildflower seeds the best chance to grow and get sunlight without the native weeds stealing the available resources: 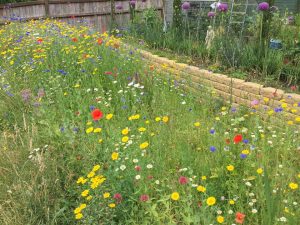 After two months the wildflower meadow area started to take off and it is now in full flow in front of my second terrace wall. My neighbour has asked “Did you plant that or is it wild” which I take as a sign of success because if he can’t tell then I’ve done a good job. In fairness to MrsGrow’s original hesitancy about a wildflower area I’m not entirely sure this is the best place for such a bed, it doesn’t really match my formal planting arrangements nearby. However, how often do you get a chance to sow a wild meadow in your garden? It Really does look stunning, there is a definite uplift in bees, butterflies and dragonflies frequenting he garden and should the opportunity arise again I now consider myself fully trained in this planting style: 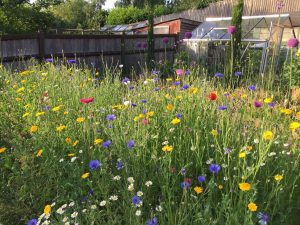 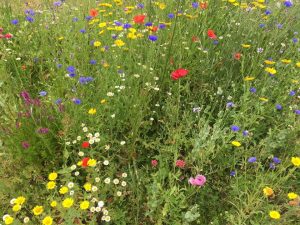 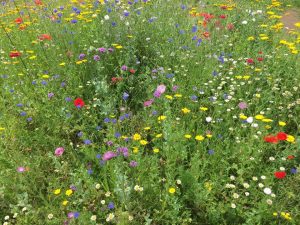