Over the years I’ve heard a number of allotment folk say that they remove the flowers from their potato plants because it increases the number of potatoes. The theory is that by preventing a potato plant from putting its energies into flowering and fruiting, it goes on to produce larger tubers below ground instead. But is there truth in this crop yield boost idea or is it yet another gardening myth?

To find out the truth I began by running my own trial this year sowing four rows of Charlotte potatoes at my allotment. They were sown side by side, at the same time, with similar manuring, fertilising and watering quantities. In essence I did my very best to ensure that they all experienced the same environmental factors. Having so far harvested four plants that went to flower and four others that were prevented from doing so, I can give you the following results: 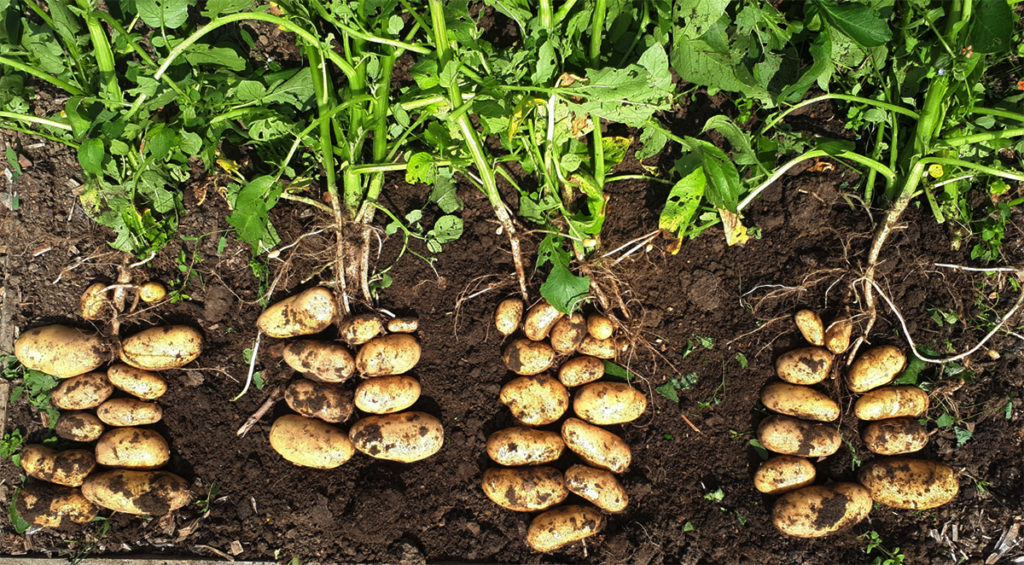 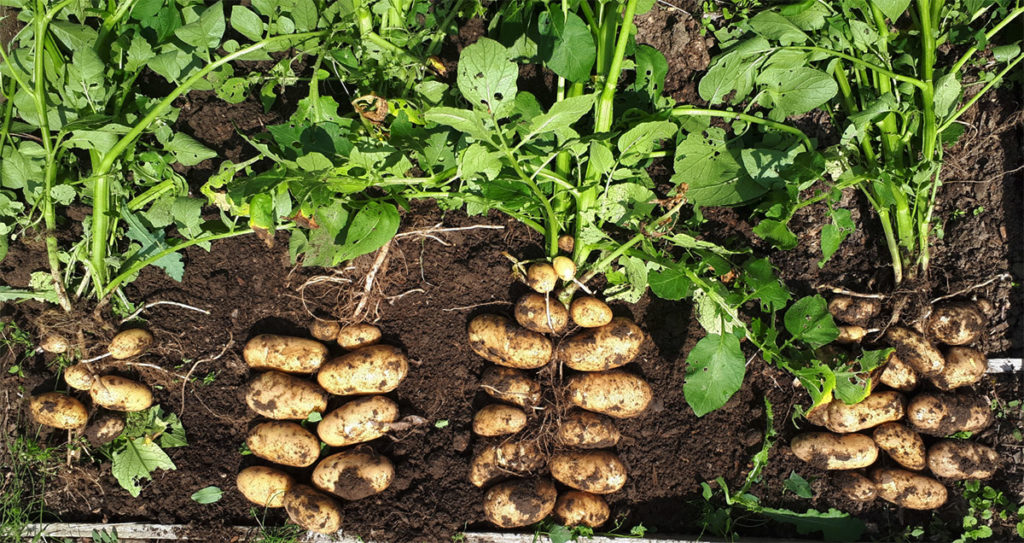 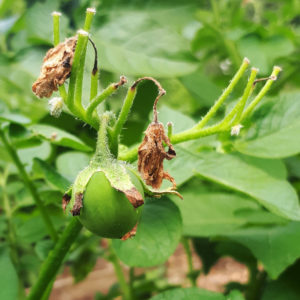 So that’s it right? Removing flowers is a load of old baloney? Leave them on for more potatoes? Well I was certainly keen to draw that conclusion (I love to shoot down a myth) but a bit of research tells me that it may not be that straight-forward. I grew Charlotte potatoes (second-earlies). They grow quickly and are harvested early. Whilst I left flowers on two rows I noticed that only one flower produced a little green fruit across fourteen plants (see right). So what? Well if the flowers didn’t produce their tiny green toxic tomato-like fruits we can assume that the plants didn’t expend any energy to do so in any case. ‘Flowers on’ therefore didn’t have any real impact on yield (if it was going to) and a 7.5% weight variance is pretty insignificant. So in the case of first and second earlies at least, it probably doesn’t matter too much whether you remove flowers. 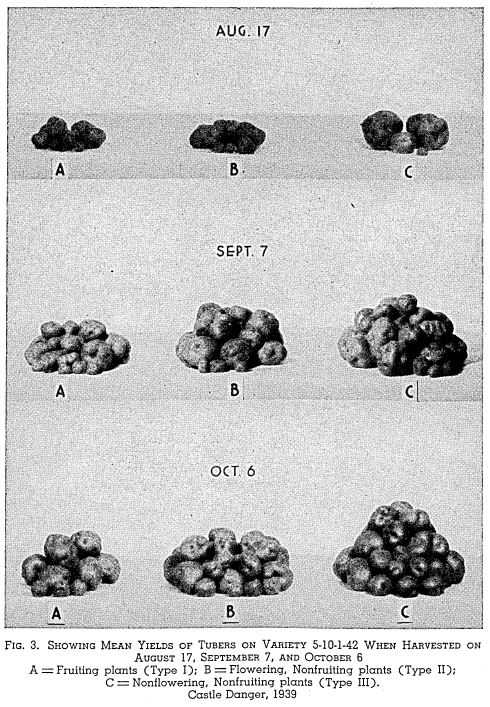 In 1942 the University of Minnesota – Agricultural Experiment Station produced a technical bulletin called ‘Influence of Flowering and Fruiting Upon Vegetative Growth and Tuber Yield in the Potato’ [2]. Its detailed research covers some potato planting experiments carried out at three of their sites. At each location the result was the same, the fruiting potato plants yielded a lower weight of potatoes, vs. flowering potatoes and where flowers were removed completely yield was highest. Indeed they found that the yield on potato plants with fruits on ranged from 12.77% to 27.24% lower.

To determine the influence of both flowering and fruiting, measurements were made on total yield of tubers and number of tubers reaching marketable size (exceeding 85 grams). Yields were significantly reduced on both fruiting and flowering plants of all varieties as compared to non-flowering, non-fruiting plants. Fruit formation and tuber production were found to be concurrent processes. The decrease in yield appeared to be related to the number of flowers and fruits formed. Yield reductions per gram of fruit set and per flower formed tended to be greater on the lesser flowering and less fruitful plants. The study further indicated that flowering and fruiting reduced the total number of tubers set, and the number and weight of tubers reaching marketable size.

Given that their research is a little more wide ranging and detailed than mine, and my previous assertion that my Charlotte plants didn’t even go on to produce fruit, it makes it hard to draw any real conclusion from my own allotment test. Perhaps something using a main crop Maris Piper is needed next year. But maybe it’s not that simple to test anyway…

Other similar tests have of course been conducted since the 1940s. In 1990 the Canadian Journal of Plant Science published a paper called ‘The Effect of Flower Removal on Potato Tuber Yield’ [1]. Their results were mixed with one test mirroring the increased yield of Minnesota, and another mirroring my own. Their conclusion? ‘Response to flower removal appears to be dependent on environmental conditions.’

This means that it is almost impossible to ignore the key drivers that really affect potato yield [6]:

Furthermore, other tests looking at seed potato size have found that plants from larger tubers grow more quickly, which in turn makes them energise tubers faster and flower earlier [3] [4]. That I found to be more interesting, I have of course always instinctively sown the larger seed potatoes over the smaller ones where I have a choice but who’s to say whether the seed potatoes in any of these tests were all of an equal size at the outset of any of these tests?! If I repeat next year with main crops I shall ensure that all the seed potatoes are of the same size, and large.

But should you remove potato flowers or not?

If you have the time to remove potato plant flowers on maincrop varieties then do so yes. Since the evidence is that it either boosts yield, or does not boost yield, but it certainly doesn’t reduce yield. So you have nothing to lose by taking them off. In any case, you don’t really want lots of tiny green toxic potato berries growing on your plot lest some visiting child takes a fancy to one and poisons themselves.