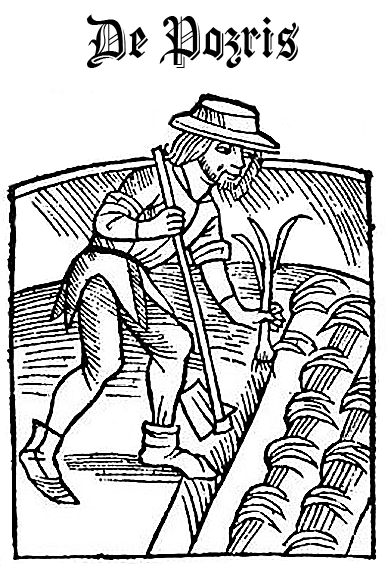 This sowing is made either alone in the ridges or mixed with other herbs, in an earth that is perfectly worked and covered by manure. These seeds must be spread densely, and the biggest leeks are the ones to uproot first [for replanting again at depth].

When planting leeks, one should not look for soft earth, but half-way and optimum; and even if it were almost dry, it would be very good. There are two ways of sowing:

One way, which is typical of Bologna, is to plant inside furrows in a way in which each furrow is separated from the other by an entire hand span, and the leeks are put in the furrows distanced four fingers from one another [see illustration]. And when digging the next furrow, cover the leeks [in the previous furrow] with the earth and pack gently with the feet.

Make a hole with a pole that is as thick as almost the beam of a lance.

In the second way, they are planted with poles: in well worked and organised ridges, make a hole with a pole that is as thick as almost the beam of a lance, and put it inside for a hand span or more [5 inches deep], distancing the holes from each other for a little more than a sommesso [the length of a fist with a thumb]. Put the leeks well ordered into them. The holes must not be filled, nor anything else be put into them: yet, once three weeks have passed, when grass is born between them, they must be hoed, so that they can be purged from weeds. It is said that leeks planted in this way are better than the others, and also that they cannot be stolen easily; however, this option is very tiring. 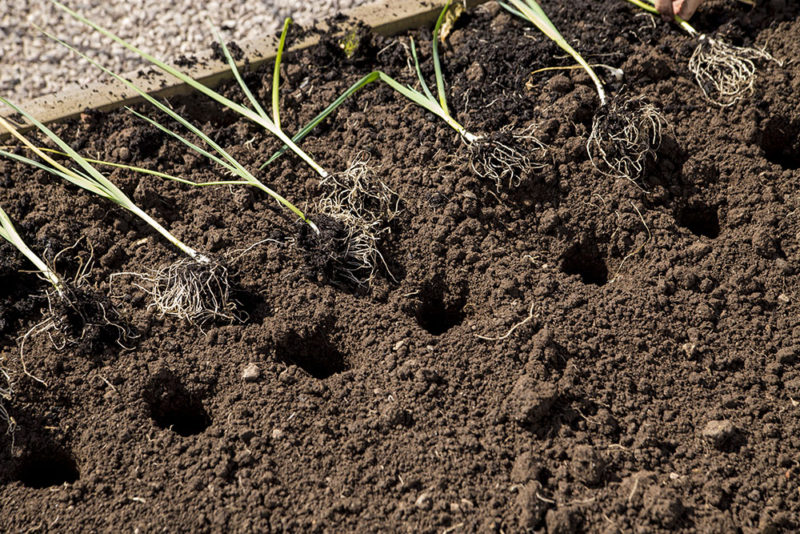 They can also be optimally planted amongst onions, when these are already almost big. And once the onions are uprooted, you find that the leeks take root and grow well. And when they are uprooted, some can be left in a place and these can be grown for their seed. The seed can be stored for three years without damage.

Leek is hot and dry in the third degree [Raises Heat to Drive Out, Dehyrates]. As a food it cannot certainly be praised, because it is bad for the stomach, as it creates swelling and wind, and bites the stomach’s nerves with its sharpness. [I never read a better description of IBS, and indeed I cannot eat leeks for this exact reason]. Leeks also have the property of creating a black vapor [not literally but inside the body], typical of melancholy: this vapour, rising to the head, obscures sight and elicits terrible and fearful dreams. So choleric and manic people should watch out for it, as well as those who have head obstruction. [Leeks cause depression, who knew?]

Those who love to eat it, should take lettuces, endive, purslanes and similar things after eating leeks, so that their heat can be temperated [reduced] thanks to these things. Alternatively, boil them, wash them two or three times, and then give them to eat.

Nonetheless, leeks are really good as medicine, because, when eaten raw, they cleanse the trachea from big humors, and open the obstruction of the liver.

If put in the nostrils, leek juice with vinegar, rose oil and incense, tighten the blood of those who have a cold nature. Also distilled in the ear, mitigates the pain caused by cold and humidity.

Raw leek is also useful when smeared on the bite of snakes. Also, when cooked and dressed with almond oil, generates lust. Pliny says that leek mashed with honey and smeared on wounds will heal them, and its juice drunk with wine sorts the pain of the loins, and mixed with salt promptly heal wounds, softens hardnesses and welds fractures.

When eaten raw, leek is also good against drunkenness, and stimulates lust. It drives away scorpions and snakes even just thanks to its smell. It also has value against toothache and kills their worms.

However, if eaten too much, it enlarges the thinness of the eyes, it weighs on the stomach and generates thirst, it sets fire to the blood and burns.

Leek seed is drier and of major effect, and if you give three drams with two drams of garlic seed, it marvellously tightens the blood of those that spit blood from their chest [TB sufferers presumably].