You are at:Home»Health & Outdoors»Watermelons and Cucumbers: Medieval Grow Your Own

Water melons and cucumbers need to share the same ground and the same months as the pumpkin. They should also be planted and harvested in the same way. However, the intervals between plant growth, fruit setting and harvest are shorter.

Once they germinate the seeds must not be over-watered as water will easily destroy them. Once planted, for the next six or ten days, check and see whether they are spoiled. You will know this by checking whether they are hard or whether they have opened. If the seeds remain soft and closed, they are not good, and they will have to be replaced with new ones. Again, after six days they must be checked and, if needed, replaced one more time.

Melons and cucumbers are helped by weeds, so they do not need hoeing and cleansing [early no-dig!]. Some people say that if you macerate the seeds [soak them in liquid] using goat’s milk or mead [honey with water] they will grow sweeter, white and tender. According to what Virgil and Martial say [ancient Roman poets] if you submerge the seeds two palms deep [one hand on top of the other] inside a small open pot of water they will also grow best [it does not say how long for – possibly over night as per the pumpkins translation]

Cucumbers and melons are cold and humid in the second degree [have anti-inflammatory medical properties] and are difficult to digest. Cucumbers are worse than watermelons for digestion and the external part of both is extremely difficult to digest. Still, their marrow generates a more perfect humor [essential bodily fluid believed vital to health]. When their substance is eaten, they do great things for those who have a hot and strong stomach and for those who get tired during summer. Yet, they are harmful to phlegmatics [idle and stubborn people] especially to their stomach and cause it some irritability. [early IBS!]

The juice of watermelons and cucumbers, is good for those with fever, and they mitigate thirst. They are not to be eaten cooked, only raw. Only pumpkins must be eaten cooked. The smaller, tenderer and greener (or whiter) cucumbers are, the better they are. They are not good when their substance becomes hard, and their colour becomes yellow. However, watermelons are better when ripe, which can be seen when they become soft and lighter.

Armenian Cucumbers are thin, green and very long, and almost all twisted, and we call these melangoli: these are eaten unripe, like cucumbers, and have the same flavour: but are less cold and are more digestible, this is why they say that they are better than cucumbers. [I’ve ordered some of these from rareseeds.com to test out – obviously they weren’t originally called ‘Armenian’ Cucumbers but that is their name today] 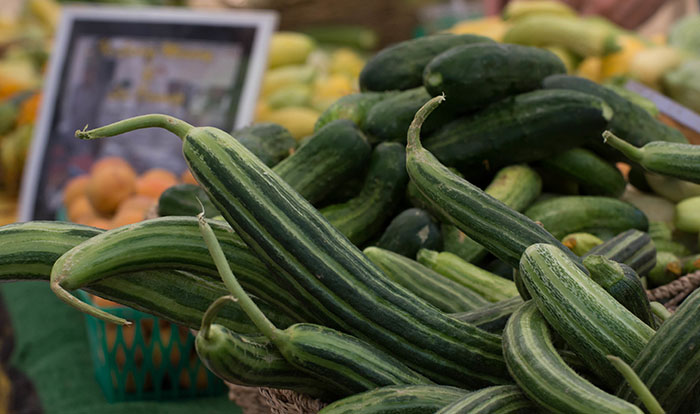 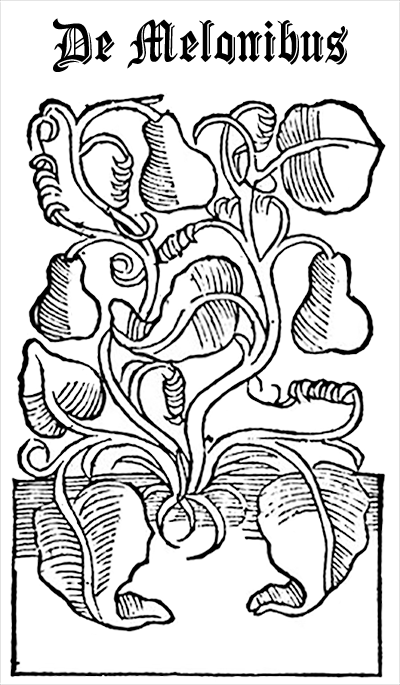 Melons desire earth and weather similar to cucumbers and watermelons, but less well fertilised, so that they can become more flavourful and hard, and can ripen sooner [logically too much fertiliser / nitrogen would make a much bigger plant that spends too long growing and not enough time fruiting]. They must be planted in the same way and that same period as cucumbers and watermelons. Once born [germinated] they shall not be watered.

Some are big, and are eaten ripe, that is to say when they become yellow and start to have an odour. The Greek ones, which have very small seeds, are the best in all the generations of melons.

Melons are cold and humid in the second degree [again have anti-inflammatory medical properties], and the sweet ones are moderately cold. Avicenna [a Persian mathematican] says that its root induces vomit in the same way that has been said of the root of cucumbers and watermelons.

It is better that those who want to use Melons do not eat any food before consuming them, so that they do not cause nausea. Isaac [son of Abraham] says that, once eaten, one should wait until they are digested before having other food. [We know today that melon is a fast digesting food, it is advisable NOT to have it as a starter immediately prior to foods like meat which take longer to break down in the stomach lest they exit partially digested and cause stomach ache.]

Avicenna also says that the melon is best digested last as a dessert and its nourishment and its humor are better than that of cucumbers and watermelons. However, when the melon rots inside the stomach, it becomes poisonous. It is therefore good that when your stomach is heavy you let it out at the earliest opportunity. [!]

Amongst those things that give help after eating them there is, for choleric types, oxysaccharum [a mixture of vinegar and sugar] fennel and resin. Yet idle people take oxymel [a mixture of honey and vinegar], ginger or cumin and drink pure wine. Melon seeds also help to create urine and cleanse the kidneys and the bladder from sand and stone.