You are at:Home»Inspiration»Gardeners World: How Nigel turned me into Monty

Let’s start by saying YES, perhaps it was a little odd to think “I’m going to start tweeting as Nigel the Gardeners World dog”, but I freely admit that I am a little odd… and thinking outside the box is what I do. It’s practically the best part of my day job in digital marketing, spot opportunities that other people don’t see and explore them. I like to zig when the world zags. Add into the mix that as a child my mother normalised the vocalisation of our pets’ thoughts out loud (cats and rabbits especially) and you have a very short leap of imagination to reach @montysdognigel. I think my mother was a fan of Johnny Morris’ TV show Animal Magic – so perhaps we owe the existence of @montysdognigel to dear old Johnny?

What I didn’t see in starting out on the Nigel twitter journey in 2014, was that it would completely transform my life. Here you are on my allotment blog reading this post. Why is there a blog? Because I have THREE allotments. Why do I have three allotments? Because I rediscovered my childhood love of growing my own veg and flowers. How did I do that? By being @montysdognigel and becoming a huge fan of Monty Don, learning about Longmeadow and religiously watching Gardeners World. Yes, I watched Gardeners World from time to time beforehand, and grew a few potatoes at the bottom of the garden, but I wasn’t obsessed with horticulture. All that has changed now.

This year I volunteered with the RHS at Chelsea and Hampton Court flower shows, supporting gardens by Tom Stuart-Smith and Piet Oudolf. I’ve been on garden design courses, I’ve attended the wonderful one-day workshops with Fergus and his team at Great Dixter. I’m studying the RHS Level 2 course online. As a family we visit gardens all the time (usually the children protest a little but they learn to love the open spaces that places like Heligan have to offer). My gardening book collection has gone from four to ninety four (no MrsGrow is NOT happy). I’ve landscaped our hillside garden to make terraces (but MrsGrow is happy about that).

In January 2016 I quite unexpectedly had a three month breakdown – panic attacks, anxiety, sensory overload in crowded places – I’m not sure I’d throw depression into the mix but it was a miserable time and I often felt I was losing my marbles. The way out of the void and back to functional normality was a combination of Cognitive Behavioural Therapy via GP referral and hugely increased allotment time. Eventually I found myself again, actually I found a better more patient person, a person focused on the things that really matter in life like family, food and nature, instead of server deadlines and urgent emails. I find it ironic that Nigel himself has helped Monty overcome depression and in a much smaller way Twitter Nigel gave me a nudge towards horticultural recovery. That dog has a gift that even flows out of a TV screen. 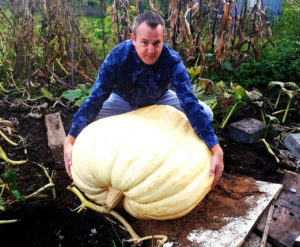 I suppose what has happened is that as time has passed I have become more like Monty and less like Nigel. Quite honestly in 2018 it’s been a bit of a struggle to think like a TV dog in a garden I’ve never visited. Call it writers block or whatever but enthusiasm has been waning after five years because I am much more interested in my allotments and garden. I have a blog to write and other related social media accounts to maintain. At 41 I’ve just been persuaded to become Chairman of the local Allotment Association (and won the pumpkin show). Probationary Membership of the Garden Media Guild has also recently been granted as I explore my new found love of writing. I’ve made lots of new horticultural friends and have discovered that, like my Grandad and Great Grandad I actually belong in horticulture. It’ll never make me rich, but if I can balance paid web marketing with unpaid outdoor freedom that’s better for me physically and mentally.

Nigel has been enormous fun. I have thoroughly enjoyed entertaining people with far-fetched stories about giant apes and unexpected coach party arrivals. It’s also been rewarding to share serious horticultural material and raise some funds for the gardeners charity Perennial. I think @montysdognigel really became an extra personality in our household these past few years “You won’t believe what Nigel tweeted today” I’d say to MrsGrow to maintain the illusion that even for me he was a separate entity. If I made you smile in a twitter feed increasingly filled with hard left and right political views, blatant sexism and hatred then I am a happy man. Twitter can be a hard place, people are quick to judge but look closely and you will find lovely people in gardeners. Gardeners care. Gardeners nurture life. Gardeners are probably the best people in the world. God bless you all and be good to each other, we haven’t a hope if we don’t accept life for its differences of opinion.