You are at:Home»Health & Outdoors»Is it safe to grow your own food inside tyres?

Many allotment sites have already banned the use of tyres but I see the odd few being used at our allotments. Typically they’re weighing down thick black plastic sheeting over winter to stop weeds growing and to warm the soil earlier in the spring. Occasionally tyres are being used as planters to grow vegetables in. You’ll find multiple gardening sources recommending them for potato growing because you can keep earthing up the plant stems by adding more tyres and soil on top. I’ve always thought tyres an odd choice for a root crop like potatoes, I wouldn’t particularly want to eat a potato grown inside an old tyre. Why not? Well the ingredients of tyres put me off a little, especially these known carcinogenic chemicals:

A used tyre, left outside in sunshine and rain will weather and will eventually leach these chemicals, and others like mercury, lead, cadmium, into the soil. The older the tyre gets, the more it will deteriorate and the more some of these chemicals might find their way into your allotment or garden soil which means they could eventually find their way into the food you grow and eat.

The Story of Street-Collected Leaves and Tyres

In 2012 the Environment Agency prohibited the collection of street-collected leaves for use in making compost. In their study [7] they found that

“levels of polycyclic aromatic hydrocarbons (PAHs) were found to be much higher in street leaf sweepings and the composted output than in the other materials. PAH contamination may originate from a number of polluting sources including vehicle exhaust emissions, oil spills and leaks, and tyre wear. Some PAHs are known genotoxic carcinogens and pose a significant risk to human health and the environment… The main conclusion from this current trial is that most samples of composted street leaf sweepings are not suitable for agricultural or horticultural use.”

Of course powdered tyre residue finding its way up and down our high streets contaminating leaves and washing into drains and streams is more of a health issue than a single large used tyre on an allotment. We should probably be far more worried about that issue! However, for me it’s all part of one big set of chemical exposures which we are all faced with daily, we should do everything possible to mitigate the risk to our health and that of the wildlife around us.

What does the science say about tyre leaching? 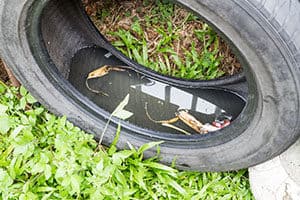 The Ministry for the Environment of New Zealand published a handy report ‘Potential Environmental Impacts of Tyre Leachate’ [8]. In this report they have a table which lists all previous lab ‘tyre leaching’ tests conducted globally since 1993. The good news is that large tyre pieces (or whole tyres) are less likely to contaminate the surrounding area, some key observations were:

tyre size: leaching from whole tyres is likely to be slower than leaching from tyre chips or shreds – this is because of the differences in the surface area to volume ratio

permeability of soil: leaching is likely to be faster when soils are permeable (sandy soil rather than clay)

contact time with water: the longer the tyres are in contact with water, the greater the risk of groundwater contamination

So are tyre chemicals really worth worrying about? 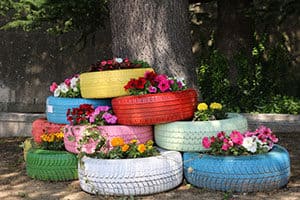 For me a tyre is a tyre, it’s packed full of chemicals, many of them carcinogenic. I can’t foresee a time when I use tyres on my allotment to grow food any more than I can foresee RoundUp (Glyphosate) making an appearance. However, not everybody worries as much as me and not all of us are striving to be organic. If you want to use tyres the most logical way to do so, whilst at the same time minimising any health risk would be:

On a somewhat related note something I stumbled across whilst writing this article was the prevalence of young goal keepers being diagnosed with cancer after they have had long term exposure to artificial football pitches [9] [10] [11]. Since early 2000 these pitches have been covered with something called ‘tyre crumb’ which consists of tiny pieces of old tyre. One pitch requires 120 metric tonnes of shredded tyre (or 20,000 old tyres). It’s a handy way to dispose of old tyres when landfill rules have limits… More worrying is the evidence of the scientific tests highlighted in that Ministry for the Environment of New Zealand report – that very clearly said that ‘tyre crumb’ was more of a contaminant than whole tyres. We’ve got children dancing around on this stuff, falling on it, scraping their knees on it… I for one will be very carefully monitoring the exposure my young son has to these possibly carcinogenic football pitches in future.

[2] 1,3-Butadiene
‘Studies have consistently shown an association between occupational exposure to 1,3-butadiene and an increased incidence of leukemia.’
National Cancer Institute

[3] Benzene: A carcinogen, developmental toxicant, reproductive toxicant. Can cause bone marrow failure, and has been linked to aplastic anemia and acute leukemia.
British Medical Journal

[4] Phthalates: toxic for reproduction and endocrine-disrupting – proposals for a phase-out in Sweden
Swedish Chemicals Agency

[5] Polycyclic Aromatic Hydrocarbons (PAHs)
Many PAHs and their epoxides are highly toxic, mutagenic and/or carcinogenic to microorganisms as well as to higher forms of life including humans.
Asian Pacific Journal of Tropical Biomedicine

Goal-keepers
[9] Are synthetic fields a major cause for concern?
ESPN

[11] “Uses of recycled rubber tires, especially those targeting play areas and other facilities for children, should be a matter of regulatory concern.”
Chemosphere Journal