You are at:Home»Health & Outdoors»Children gardening? They’re not even leaving the house!

‘We need to get more children gardening’ goes the all too common refrain but never mind gardening, it seems that as a nation we can’t even get children out of the house! Last Tuesday evening I went to the local park with my boy to play football (he was in World Cup mood). It was a beautiful warm summer’s evening but the park was deserted. Again. Not another person in sight, adult or child. Sadly this is far from unusual but it always really puzzles me, as a child of the 80s & 90s the local park was always full. They’d be multiple football matches going on, a queue for the swings, somebody poking dog poo with a stick and a crowd setting fire to something in the bushes. Where ARE all the children? I’ve lost track of the number of times that we as a family have the local football pitch and basketball court entirely to ourselves.

I posted a flippant tweet about all the fat diabetic kids being at home with rickets playing Fortnite on an electronic device. That offended a few folks (yes I did generalise) but doesn’t my tweet summarise the latest headlines that our children are not as healthy as previous generations? Yes I certainly should have clarified that I wasn’t talking about those children unfortunate enough to have Type 1 diabetes (an autoimmune disease, sometimes hereditary), or those coping with severe autism, social anxiety, or the very rare condition of genetic rickets, but there isn’t much room in a tweet for a disclaimer. When you look at the facts there are some very alarming trends that show all our children are disengaging from exercise, nature AND each other – there’s even a name for it ‘Nature Deficit Disorder‘. Consequently our children are becoming unhealthy which will lead to shorter lifespans and an increased reliance on healthcare. What hope is there for their engagement in horticulture?!

Here are a handful of alarming facts I discovered in recent surveys and official government statistics:

I am genuinely worried for the well-being of the next generation but it seems that no single factor is the cause of all this, instead there are a myriad of societal and technological reasons for childhood health to go backwards in the UK.

Childhood Obesity is more dominant in low income households that rely on cheap food, food which is typically higher in sugar and saturated fats. 26% of children living in the most deprived areas are obese compared to 11% of those living in the least deprived areas. Time (and money) is undoubtedly a factor, parents working multiple jobs are not able to find opportunities for cooking from scratch using healthy raw ingredients, hence the reliance on instant meals, take-aways or frozen food. I do occasionally see allotment owners on forums commenting that they are growing their own food to try and lower their food bill. That is a real challenge, my allotment is certainly not profitable. I strongly admire those trying to make a difference by bringing home healthy produce for their family but again growing your own produce is very time consuming. With children to juggle, an allotment is tricky to manage and sometimes you do just want some peace and quiet, but I would recommend involving them as early as possible because by the time they reach the age of ten it’s a tough battle to win. 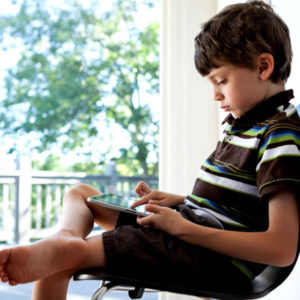 Extracurricular children’s sports clubs are expensive but the lack of childhood outdoor activity is without doubt linked to rising technology use and poor parental control because the parks are empty. I say that as somebody who works in digital and started programming at age six on a ZX Spectrum in 1983. I spent my fair share of time in a darkened bedroom waiting for games to load. But games were not so addictive back then and in the 90s we still went to the park to kick a ball following a 2-hour Super Mario Kart stint. I cycled alone daily through woodlands and fields (and survived!) and had a small patch of garden where I grew my own swedes, radishes and marigolds. Today, as computer game makers have become more sophisticated they have an in-depth knowledge of human psychology, they know how to make online games super addictive – as addictive as cocaine (with similar dopamine dependency). This has even moved beyond gaming and into technology areas such as social media with the ‘gamification’ of simple processes to make them addictive – Instagram delays notifications to keep children and adults constantly checking their devices (yes they really do that). It is ironic that in Ebbsfleet they have resorted to gamification of exercise to combat obesity – an app rewards those taking part in walking, cycling and running with points that can be redeemed against food shopping or pizza express…

Parental fear of road traffic and stranger danger has created a zero-risk society with children and parents feeling safer at home. What else is there to do indoors than allow unfettered access to TVs, tablets, consoles and mobile phones. Anything for peace and quiet as the children wear you down. Of course, the irony there is that children are probably far less safe on social media or chatting with strangers on Roblox (a gaming platform) than they would be at the local park. As a parent I acknowledge that it is certainly very difficult and energy sapping to police the technology, to always be the bad Dad, regulating time slots, but it is a necessity. I will often switch off the router at source to enforce the rules. It usually isn’t received well. I live with that. At a recent secondary school induction evening for my daughter the new school set a ‘tough challenge’ of three no-technology days over the forthcoming summer holidays. “Mum” said my daughter turning to my wife, “We already do that”. Yes Sunday is a no technology day for the kids. Only the downstairs TV is allowed to be watched and the remote control is adult owned. Guess what? On Sundays the children ride their bikes or play badminton in the garden, they read books, they draw, they colour, they build with lego, they go to the park, they drive radio controlled vehicles. That or we take them outside, visiting a local village fair, a National Trust garden or a beach. I do my best to share pictures of my children helping me at the allotment to encourage others to involve their children, but I received a private tweet last week ‘I don’t agree with posting photos of your children gardening on social media so I am unfollowing you’ (Daily Mail reader I think, absolute fear and paranoia). 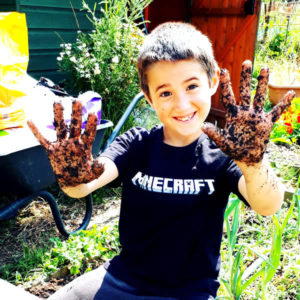 Just as getting outside into nature and sunlight is vital for adult physical and mental health it is arguably even more important for children. Their immunity and brains are developing and need exposure to soil bacteria (digging!). Young eyes are maturing and need 2 hours of sunlight per day as a minimum to avoid short sightedness (Myopia). Vitamin D (which incidentally is not impeded by sunblock) creates strong bones. Physical activity makes the growing body stronger, it ensures that our children go on to live long lives. Gardening does offer some of these things but even outdoor play builds social skills, imagination and encourages a lifestyle that embraces the world around us. Un-managed in-door technology only impacts on all of these things, bringing addictions that affect the mental health of young minds. It’s time we did something about it, it’s time more people regulated the iPads and stood up to their children. It’s time we accepted that life itself is a risk. Buy them a football, teach them the green cross code and kick them outside, allocate them a patch of garden and give them a spade. Let them be bored and let them solve that dilemma themselves. It’s the best thing you can do for them. Maybe you can even join them and put down your own iPhone, find a stick and go poke some dog poo.

Councils warn today that more than 600 children and teenagers are being treated for a type of diabetes normally only seen in adults aged over 40 an increase of 14 per cent in a year, which reinforces the need for urgent action on obesity (Diabetes.org.uk)

One in five children are already overweight or obese before they start school and only one in ten children aged two to four meets the UK chief medical officers’ physical activity guidelines for this age group (Gov.uk)

Four in five obese school children are likely to be dangerously overweight for life, according to a new report. This could result in them losing 10-20 years of their life (The Independent)

Screen-addicted children spend 16 minutes a day outside (The Times)

Dr Claire Lemer, a consultant in general paediatrics at the Evelina London Children’s Hospital, said that 40 per cent of children have some kind of vitamin D deficiency (Independent)

Any child who doesn’t get enough vitamin D or calcium either through their diet, or from sunlight, can develop rickets. But the condition is more common in children with dark skin, as this means they need more sunlight to get enough vitamin D, as well as children born prematurely or taking medication that interferes with vitamin D (NHS)

According to a 2008 National Trust survey, one in three could not identify a magpie; half could not tell the difference between a bee and a wasp; yet nine out of ten could recognise a Dalek (National Trust)

Dorothy Judd was reported to the police for simply playing in the woods with her five-year-old grandson. Now she is afraid to be alone in public with him (The Guardian)

Based on a handful of large epidemiological studies on myopia, spending time outdoors – especially in early childhood – reduces the onset of myopia. Scientists can’t nail down the cause of the recent rise in nearsightedness—whether it’s focusing on your phone nine inches from your face all the time, how light interacts with our circadian rhythms to influence eye growth, or none of the above (Wired)

What is Gamification? (Search Engine Watch)