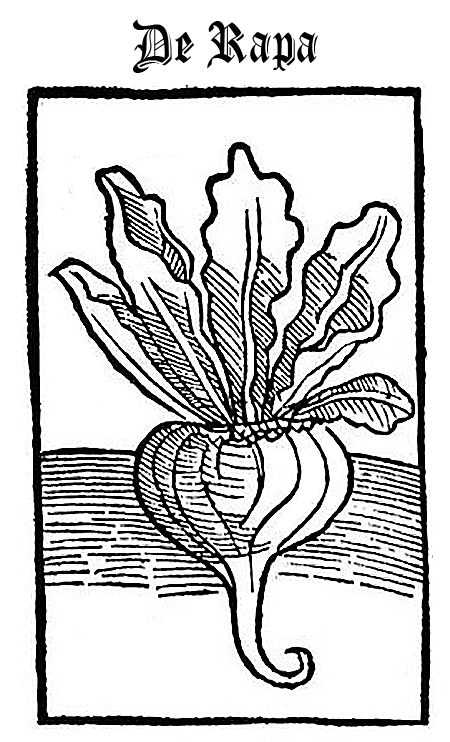 Turnip takes root in almost every habitable environment. In order to take root optimally, it desires earth that is fat and loose [crumbly] to the point that it is almost reduced to dust [a fine tilth]. In order to avoid that its seed is born too thick [seedlings too close together], it must be sown [scattered] mixed with dust [seeds mixed with sand] towards the end of July until mid-August [in Italy, but May/June in the UK], or a little further on; or, in hot and dry places, for the whole month of August, especially when the earth is moist thanks to the rain.

If sown sparsely, it grows bigger. However, in case its plants have grown too thick [too closely together], when these are strong enough, uproot some of them and transfer them to empty places, or throw them away. [I’ve never tried transplanting turnips but interesting that it was common practice with reasonably sized turnips]

The turnip is helped a great deal by constant watering and hoeing. It can be also sown well in bare fields or in stubble, when ploughed optimally. Its seed must be covered only with the harrow, so that it does not go down too deep. They can be also be optimally sown alongside foxtail millet and late-ripe millet when hoed for the second time; and when the foxtail millet and the late-ripe millet are removed they must be hoed [companion planting / space saving].

They are happy in a clear, uncovered field, whilst they are harmed by shade. But if it is the time of very dry weather [a heat wave], which does not allow them to be sown properly, then you can sow it densely, in the way of cabbages, in a shady place where it can be watered properly; and once the plants have grown and the ground is watered by rain, they will be able to be moved in optimally cultivated earth, from about the end of the month of August till mid-September [transplanted again].

Turnips are harvested in the month of October. And, once their leaves are taken off, the most beautiful ones are planted again, so that they can produce seed the following summer.

With turnips, mixtures with water are made, so that they can be ready for winter and Lent in order to cook. This is done in this way: first, wash them optimally, and then put them in a pot in a well ordered way [stacked]. And in each pot add salt with fennel and winter savory seeds; or only press them into salt and leave them this way for eight days: and then put cold water on top, so that they are covered, and in this way they can be stored for the whole year [medieval pickling].

Pickling mixtures are made also with vinegar, radish, mustard plant, fennel, salt and honey, and they are made in the following way: in a quantity equal to two common buckets, take one pound of radishes – or more, if you want them strong –, one pound of mustard plant, half a pound of fennel, three pounds of honey and one pound of salt. Thinly cut the radish along its length, mash it until fine and then mix with the salt. Turn the honey into a liquid and mix it with the mustard plant diluted with about half a bucket of excellent vinegar.

Make layers of turnips, rapeseeds, carrots, parsnips and pears, and, if you want, with apples, properly cooked as well as optimally cooled [blanched]and divided, and make layers, and, after adding the mustard plant and the other seeds, lay the radish with the other seeds with the salt on top, and continue until they are all arranged, and then store them.

According to Isaac [son of Abraham], turnip is hot in the second degree [Thins – Disolves Obstructions] and nourishes much more than the other herbs. However, it is digested badly, and makes flesh floppy and bloated due to its property of inducing wind and swelling, but it stimulates coitus [possibly fertility rather than the act].