As gardeners we are much more aware of the weather and climate than most people because we are generally living day to day through the health and yields of our plants (be they flowers, fruit or vegetables). During most weeks I have an eye on the BBC Weather for the Week Ahead (iPlayer) with its frost, heat or rainfall predictions, so that I can take preemptive measures in the greenhouse or at the allotment. 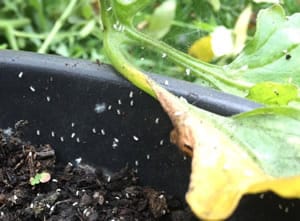 Looking back at 2017 we had an early spring which caused the tulips to come up early (I got badly sunburned on a beach around April 9th). This was followed by quite a cloudy spell of below average temperatures in July and August which affected my pumpkins (they didn’t fruit as much which was not great for my giant pumpkins which tend to fruit later than the rest – they actually failed). The sunflowers went to sleep and the courgettes and sweetcorn with them (honestly it was a bit of a relief with the courgettes!). It was also quite wet, which increased cases of tomato blight through humidity, encouraged white fly in my greenhouse and mildew on my Dahlias. Overall summer 2017 was not good for Surrey allotment growers, spring was better.

2018 is not looking like it’s going to be an early spring. The daffodils were not up in December or January for the first time in a while, then in late February / early March we have been hit with the ‘Beast from the East’ as cold polar escapes from the North pole and comes down into Europe. It’s almost as if the bulbs knew somehow that they should hold off for a while. I’m glad I have all my flower beds well mulched! We have a caravan holiday booked for Cornwall in April – a reliably warm month these past ten years but looking increasingly like it will bring back childhood memories of a frozen Easter holiday in Great Yarmouth…

From a gardener’s perspective I thought it would be interesting to again examine the weather and temperature trends locally this century. I have updated my graphs (below) to factor in all of 2017, looking again at data from a weather station in West Sussex (yes I’m in Dorking, Surrey but Crawley isn’t far). My allotment is semi-rural so during the cold seasons I need to know if the temperatures are going to drop more significantly than in a town. In towns and cities, buildings and roads retain more heat at night and concreted roads reduce evaporation which would otherwise cool temperatures more quickly (hence it’s colder in rural locations).

Looking at average weather station data from Crawley Down (on the outskirts of Crawley in West Sussex) I extracted their annual records manually and generated the resulting trend graphs myself. The outcomes displayed at the bottom of this article show that since 2000:

In 2007 An IPCC study predicted that

Averaging out these local weather trends, the average temperature change in Surrey looks more like 0.033C per decade – but warming nonetheless. It is interesting that before 2017 the average temperature was cooling marginally since 2000 but at 11.3C 2017 caused a swing the other way. It’s going to be getting wetter over the next decade in Surrey and West Sussex with increased heavy rainfall events and unexpectedly hard overnight frosts. That’s good news for golf course managers and water companies but bad news for those of us growing crops like tomatoes, chillies or pumpkins. It’s probably not great news for local arable farmers either.

Preparing the allotment for wetter and more extreme weather:

There are some steps that can be taken to make an allotment or vegetable garden more suited to wetter and more extreme climate:

Here are the graphs showing the data recorded by the Crawley Down Weather Station. I have added in trend lines with projections for the next decade to 2027 should rates of change continue as they have since 2000