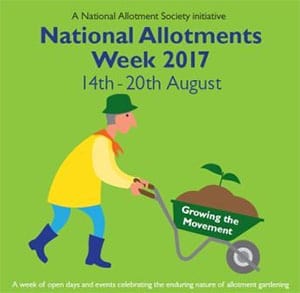 This week (14th-20th August) it’s National Allotments Week and I’m all in favour of promoting allotments for mental health and general well-being. I know only too well how beneficial having an allotment has been for my own anxiety issues, physical fitness and my family’s improved diet of fresh organic produce. At Dorking Allotment Holders Association (DAHA) we regularly take to the local village shows with a promotional DAHA gazebo because around these parts we actually have vacant plots. Ironically this means people apply for a plot expecting to wait a year or two, only to find themselves being offered one the next day and it’s not uncommon for them to have a change of heart.

You have to be made of strong stuff to have an allotment and not be afraid of regular commitment. This is not just because of the demands of nature, pests, weeds (and non-cultivation notices) but because allotments are regularly under attack. I’m not referring to the growing attack on allotment sites from county councils trying to resolve housing development issues, but the attack from human thieves and vandals (a badger eating your sweetcorn is irritating but par for the course).

Last week I surveyed 333 allotment holders on Twitter and Facebook and 38.7% of them had personal experience of theft or vandalism at their plots so far in 2017. That’s over a third!

The allotment forums are full of photographs of burned out sheds and disheartened growers with tales of theft. Indeed last month one of our sites in Dorking was attacked (again) with what we assume to be young people raiding sheds for tools and chairs to help make a bonfire on a nearby orchard site. It’s a fenced off and gated allotment site but it didn’t prevent the tools and chairs leaving the site. This site has already been hit by professional thieves this year – they stole two enormous metal water troughs, presumably for their £50 scrap value.

Nobody talks about allotment crime as being a serious issue, it’s ‘just one of those things’ but why is it? Why when we put so much effort into our plots should we tolerate any of these things as being ‘normal’?

There are estimated to be 333,000 allotments in the UK, if at least a third of them are being attacked each year where are the 126,000 crime reports? Put simply most aren’t reported because they are low-level crimes. Am I going to report a stolen pumpkin even when I find it with the teenagers who took it? No, what would be the point in making my plot even more of a target through their revenge attacks? The very serious crimes like shed arson are typically reported (see the 2017 media list below) but again go largely unpunished.

It would seem most likely that there are two types of perpetrator committing these crimes:

In the case of the professional thieves there aren’t many things we can do as plot holders beyond not keeping valuables in our sheds to begin with. I also don’t lock my shed, it simply makes a curious thief assume there is something worth locking up. My dirty tools live in the boot of my car for much of the year (to the annoyance of MrsGrow). You can fence off an allotment and you can grow thorny plants around the perimeter as a deterrent to would be young vandals but a determined thief will find a way in whatever you do to protect your plot.

With produce theft, such as pumpkins that are rather hard to miss once they begin to ripen… I try to grow orange nasturtiums across the plot to assist with camouflaging them. It’s not fool-proof of course but having a mass of orange flowers on your plot all summer long means that less attention is paid by passers by to any additional orange colours that may appear in late summer.

It is however the first group I am most concerned with; the bored young people – we need to do more to get them involved in horticultural projects to begin with so that they feel connected to allotments. This isn’t easy once they hit that defiant phase of adolescence so we need to start them young. I already addressed the subject of children on allotments not always being welcomed at allotments in a previous post, sadly it is that short-sightedness that I see is to blame for much of the allotment crime that we experience.

The annual Dorking Squash and Pumpkin Show enters its 10th year this October, at DAHA we don’t make any profit from it and it’s a lot of work for all of us who get involved. However, with increasing participation among schools each year I like to think that our efforts, though generally under-reported, will have a positive impact on petty crime levels at our local allotment sites in the longer term. I recommend making the effort to try and engage with the local community in this way, especially given that schools have little time for gardening when they are under pressure from budget cuts. 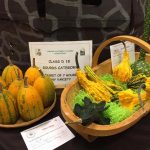 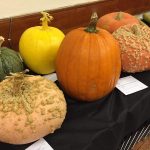 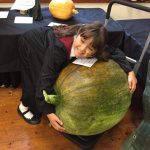 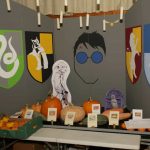 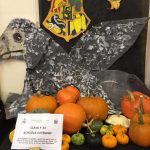 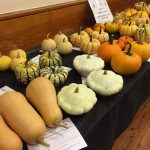