I’d waited a long time for episode one of Monty Don’s Paradise Gardens this evening – I’d actually had a potential meeting with Monty postponed at the last minute back in the Autumn because he had to rush off to Iran at short notice (yes really). Having seen what he achieved instead it’s clear he made the right call there, I’ve forgiven him.

Paradise Gardens is a much needed reminder that the garden & landscape design world as we know it in the west is not entirely of our own making. We would do well to look back further through history, beyond Gertrude Jekyll and Capability Brown, beyond the competing Italian cardinals of Rome and egotistical French Kings towards the Middle-East (and further to India and Turkey in episode two next Friday night).

An abundance of orange trees at Seville (over 40,000 apparently) that I could practically smell wafting through my new HD TV, set against magical blue skies, were just the tonic for a freezing cold winter’s evening. The newly restored Marrakesh garden ‘Le Jardin Secret’ was familiar to me immediately. I saw the designer Tom Stuart Smith present at the Gardens Illustrated Festival last year and so I remember his slide showing what a ruin that was before he commenced work. I am stealing the idea of clipped Rosemary hedges for my garden, there’s enough Buxus in place already here and more fragrant aromas are needed on the breeze near the patio area. It was heart-warming to see that the Moroccan gardener there had truly found his new vocation – I know all gardeners will empathise with his statement “Seeing a plant die hurts me”. It’s why we struggle to discard seedlings from an overly successful propagator and why I grow eight courgette plants when two will suffice. 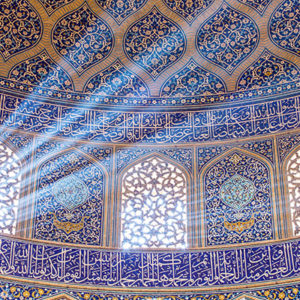 The camera work throughout the programme showing the perfect geometric garden symmetry in paths and hedges, streams and Islamic architecture really captured their breath-taking beauty. I understand that the Iranian segment was filmed entirely by a non-English speaking Iranian camera team, they did a top job for Monty. Personally the visit to Iran was a real eye opener: “Good lord life actually looks pleasant there, I’d like to go” I heard myself saying. Nothing like war torn Iraq. Don’t ask me why I thought it would be anything else, we just don’t get a lot of exposure to positive Iranian culture via the television (either that or I’m just not paying attention). At Esfahan, the Sheikh Lotfollah Mosque with its stunning blue and golden mosaic walls and tiled dome even impressed my usually culturally sceptical 10 year old daughter. Perhaps all that time spent constructing on Minecraft and Restaurant Tycoon is finally paying off with her grasp of architecture!

“Gardens underneath which rivers flow”

The most fundamental learning that I took from this first episode was the need for water in a garden. As followers of my Twitter or Instagram accounts will know, I am in the midst of redesigning and landscaping my own medium sized hillside garden. For all the symmetry I have included to please my own instinctively geometric (some say autistic) brain, I have not as yet made any allowance for water… beyond a greenhouse gutter and water butt neither of which quite get to the heart of ‘Jannat tajri min tahtiha al-anhar’ (“Gardens underneath which rivers flow”). Water is more than a cooling reflective material, it is symbolic of life itself and a garden should be alive with its presence to renew and revitalise the soul. As Monty pointed out however, not many gardeners would delve that deeply into their gardening! 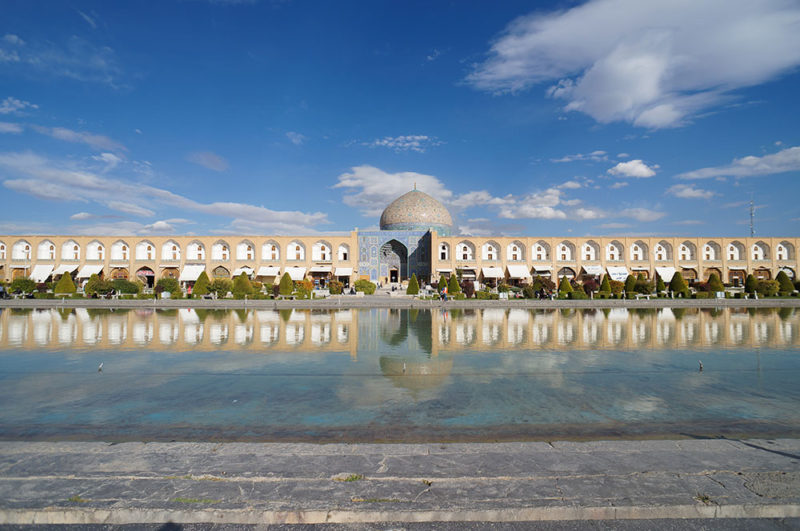 Shaykh Lotfollah Mosque next to the ornamental lake in the maydan gardens in central Isfahan (Esfahan), Iran.

Paradise Gardens is definitely more than ‘just another’ one of Monty’s excellent garden programmes. Whilst it has all the same inspirational appeal of his Around the World in 80 Gardens or Italian Gardens, and contains just as much of Monty’s infectious enthusiasm, it seems somehow more than those. The exquisiteness and wonder of the Islamic gardens and the passion of those caring for them are a reminder, without any bias on Monty’s part, that the garden-loving people of the Middle-East have a great deal more in common with the lawn rolling, rose pruning garden lovers of Blighty than we might assume.

The Middle-East contains much in the way of beauty, spirituality, knowledge and love and we would do well to remember this when faced with the raw emotions that immediately follow a rare horror visited upon us by those with only hatred in their hearts. Nobody has a monopoly on love or hate but gardens transcend religion and nation – if the world was run by gardeners it would probably be a much happier place.

I’ve no doubt that I shall watch my recordings of Paradise Gardens over and over again with copious use of the pause button to allow me to fully take in all the on-screen glory. I’m also tempted to quickly launch a company selling fountains, mosaic tiles and orange trees! Who’s with me?