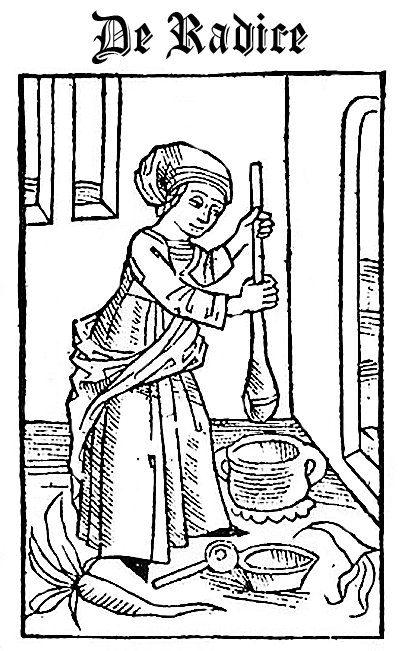 Radish is a herb, whose root carries the same name. It grows well in areas that are prone to fog and not too windy [low lying, near rivers], although it takes root and is born [germinates] in any kind of environment. It loves earth that is fat [clay] and free of impediments [stones], and that has been worked and turned over for a long period, with extractions that have occurred deeply [well cultivated]. It loathes grass and gravel.

In temperate areas, it must be sowed during the month of July or around the end of June; in hot and dry areas during August and September [In Italy…]. They must be sowed in big spaces that are deeply dug, and they are even better in sand. They can be also sowed after new rain, unless they can be watered [by hand], and they immediately need to be slightly covered through hoeing.

Manure should be avoided [this causes forking of the roots]: use hay instead, because otherwise they will become full of mushrooms [possibly due to excess high nitrogen in manure]. If watered often with salted water they will become more delicious [salt on soil is not recommended!]

Those radishes that are less strong, and that have wider and more verdant leaves, are said to be the female ones, so we will take their seeds [not roots]. It is also believed that, if we take out their leaves, and we leave them with only a small leaf, the roots will grow bigger; since they are planted in the ruts [rows] in an optimal way, they can be covered with much ground, so that the earth can be gathered around them more. And in case you want to make sweets out of the ones that are too strong, you will macerate [soften by soaking] its roots in honey for one day and one night.

Radish is hot and dry in the second degree [Thins – Dissolves Obstructions], and provides less nourishment than the turnip. The way it nourishes the stomach is heavy and hard, and is noxious for the digestion. If taken as food, it is not good for the eyes, the teeth, and all types of wounds and pains. But if taken as medicine it is purgative for the kidneys and for the big bodily humors’ bladder. It causes urine, and, if eaten, it breaks the kidney stone.

If eaten cooked, it is good against coughs, whether these have happened for a cold or humid cause. If eaten as food it causes twisting and inflammation, and becomes harmful for the stomach, a fact that is evident by the extremely smelly belch that the radish causes, especially when taken before eating; the radish given to those fasting makes the food go up [indigestion], and prevents it going down to the place where it is cooked [digested]; so it becomes a cause for digestive stiffness and provokes vomit, especially in those that naturally have wind in their stomach.

However, if taken after eating, it creates less wind, and thanks to its heaviness it goes down and helps the food where it is cooked [digested], and digestion happens properly. Still, those who want to use it in order to provoke vomit, must take it before eating. Its virtue is similar to that of the horse radish, it should be given in the same way to address the aforementioned issues, however, it is not as effective.