You are at:Home»Inspiration»I’m a Volunteer at RHS Chelsea & Hampton Court Flower Shows

Something that slipped below the blog radar recently (been up to my eyeballs in #MedievalGrowYourOwn posts) was my acceptance by the Royal Horticultural Society (RHS) as a 2018 show volunteer at Chelsea and Hampton Court flower shows. I applied online earlier in the year and was excited to be invited to a further selection session at RHS Wisley in February (my nearest RHS venue, others were available of course).

On arrival at the selection session we were informed that initially there were 400 applications for 100 flower show volunteer places. The workshops then consisted of 200 potential volunteers – so I had a 50% chance. It was fair to say that of the volunteers in my session there were 4 men and about 36 women – pretty representative of gardening as a whole I think.  The selection afternoon consisted largely of ‘getting to know you’ exercises with other aspiring volunteers, an understanding customer service workshop and finally a quiz (RHS history, garden design identification by designer etc).

During the getting to know you exercise I was quite surprised to find that one or two of the volunteers had neither garden, greenhouse nor allotment – but still a love of horticulture. It made me feel very blessed to have all three. I’m pleased to say that my team won the end of session quiz and some seed prizes. I must confess I did a little historical swatting up beforehand which helped a bit…

A week or so later I was ecstatic to discover that I had been selected and very quickly chose my volunteering sessions (a minimum of two per show AND the ‘orientation’ press day attendance). I’m glad I was at home when the session booking dates came through on the Monday morning because they were VERY quickly snapped up – within hours! I am super excited to get into both shows on Press Day, that’s going to be a real treat.

I have volunteered for show garden duties rather than retail or plant finder roles and shall be representing the RHS on their Feature Gardens at both Chelsea and Hampton Court Flower Shows.

Garden designer Matt Keightley, who has twice won the RHS/People’s Choice Award, is designing a ‘Feel Good Garden‘ which will show how gardening (or just being in a garden) can make you happier and healthier: 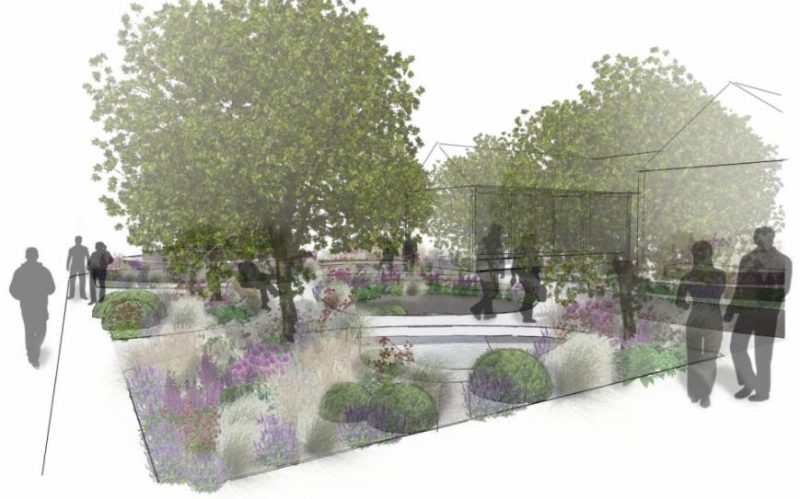 Tom Stuart Smith, who’s Moroccan garden ‘Le Jardin Secret’ recently featured on Monty Don’s Paradise Garden, will design The Weston Garden for the Pavilion. It will have public access via 4 entrances through an over-arching structure of evergreens. All items in the garden will have been recycled and the plants borrowed to create a romantic space: 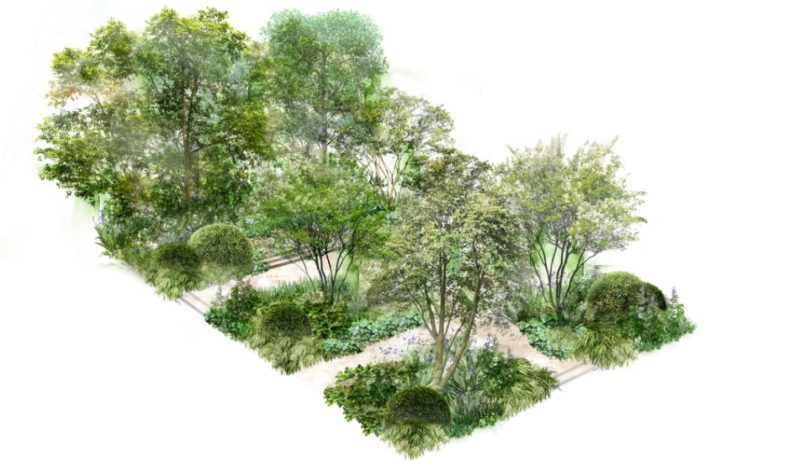 Dutch garden designer Piet Oudolf is designing the first Iconic Horticultural Heroes garden at Hampton Court Flower Show. The garden will follow his typical design style using drifts of herbaceous perennials and grasses mixed with Astilbe, Schizachyrium and Monarda and will be relocated to RHS Wisley after the show.

There will also be a mass planting consisting of thousands of Verbena bonariensis for visitors to wander through and who doesn’t LOVE that flower as much as the bees do?!

Evolve: Through the Roots of Time’ will guide visitors through barren landscapes prior to the Cambrian era over 500 million years ago, to the lush tropical jungles of the Jurassic period, and into the present day where visitors will walk through a meadow of flowering plants which first appeared during the Cretaceous time. Housed inside a dome structure and spilling out into the showground, the theatrical and educational experience will open curious minds to see how fossils were formed and seeds developed.

Find out more about the flower shows here: