I’ve often told people that the ability to ‘grow your own’ food was a basic skill that would one day be needed again by all. That time is now and no, that isn’t overly dramatic.

In 1939 at the advent of World War Two there were only 46 million people in Britain and the majority of vegetables were not imported from overseas. Indeed there wasn’t any large scale vegetable rationing during the entire war, only on foods like butter, meat and eggs. Supplies of other food ingredients such as bananas and oranges were hugely disrupted. The government of the day launched the well-known ‘Dig for Victory’ campaign to encourage us to dig up our lawns and village greens and turn them over to fruit and vegetable growing. This was largely to try and increase the amount of available food, to compensate for other things and not because of widespread vegetable shortages.

Fast forward 80 years and in 2020 an unbelievable 85% of our vegetables are imported from the EU for a UK population almost 50% greater than that of 1939.  The impact of the COVID-19 virus will likely be felt by global agriculture in terms of labour shortages, which will affect sowing, harvesting/picking and transportation in all countries. This raises some important questions:

Clearly if we’re going to be short of 85% of our vegetables through the summer of 2020 we’re looking at a serious fresh veg problem. Rationing can be expected, perhaps given the situation with empty supermarket shelves rationing is not a bad idea. However, there is one bit of good news….

Now is exactly the time to grow your own veg

A lot of people new to grow your own will think that it’s complicated, I’m telling you that it’s not, I started as a boy. It’s also fun, healthy for mind and body and gives you a great isolation or lockdown activity. You’ll need things to do if you’re stuck at home for months on end, especially with energy filled children.

If you want to avoid lengthy queues for food if and when rationing comes (probably a good idea to avoid queues with a virus on the loose) then anything you can grow at home will help. It will also relieve supplies for those without the option of growing their own food at home – one in four front gardens has been paved over for driveways and those in cities often have little more than a balcony (if that).

Dig up some of your lawn, even just a square metre, two even better, add a bag or two of compost and/or manure, mix it with a garden fork and get growing. I have two allotments but due to distance I’m not overly optimistic that I’ll be able to get to them if there is a strict lock down – I am going veg crazy at home just in case, using raised beds cut out of my lovely landscaped garden design. I’ve also got lots of pots, and there are many vegetables that can be grown in them.

#GrowYourOwnaForCorona – What to grow, easily and quickly

In the UK our two largest vegetable imports are potatoes and onions – there will be shortages of these this summer and prices will rise. However, unlike toilet rolls both of these crops can be sown here through March and April then harvested from early summer through until early Autumn. Both crops are VERY easy to grow. At the very least all homes that have the capability should grow these two crops immediately. You can practically sow them and then walk away.

Dig a hole 8 inches deep, drop a seed potato in, cover it over with soil and compost. When the plant sprouts and is about 6 inches tall pile up the sides with soil or compost to leave a small bit poking out. You can repeat as it grows taller. Distance between plants – about 40-50cm. Wait around 10-18 weeks. Water very well in dry spells. When the plant has flowers pick them off and 10 days later dig up a plant (using hands can avoid spearing a valuable spud with a fork).

Potatoes are good at being left in the ground for storage until the autumn comes when slugs start making holes in them. Keep them well covered with soil and never eat a green potato.

Where to buy from?

Got no soil? Grow potatoes in large deep pots or in potato growing bags on a patio – even empty compost bags will do, just be sure to pierce the bags for drainage. Fill up 1/3 of the bag with soil and compost to begin with then top up as the plant grows taller. 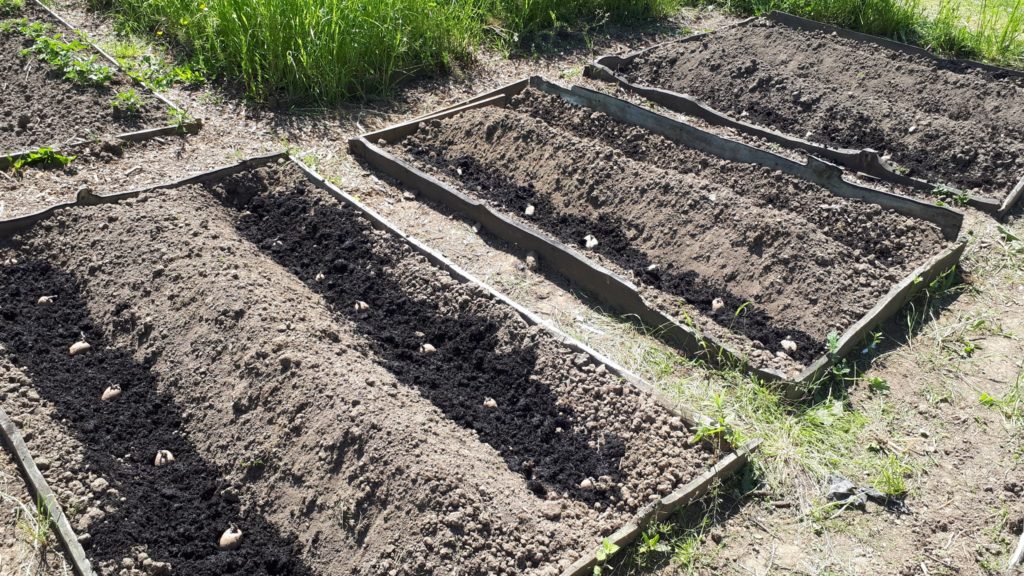 Potatoes in trenches, ready to be covered – you don’t have to have this many 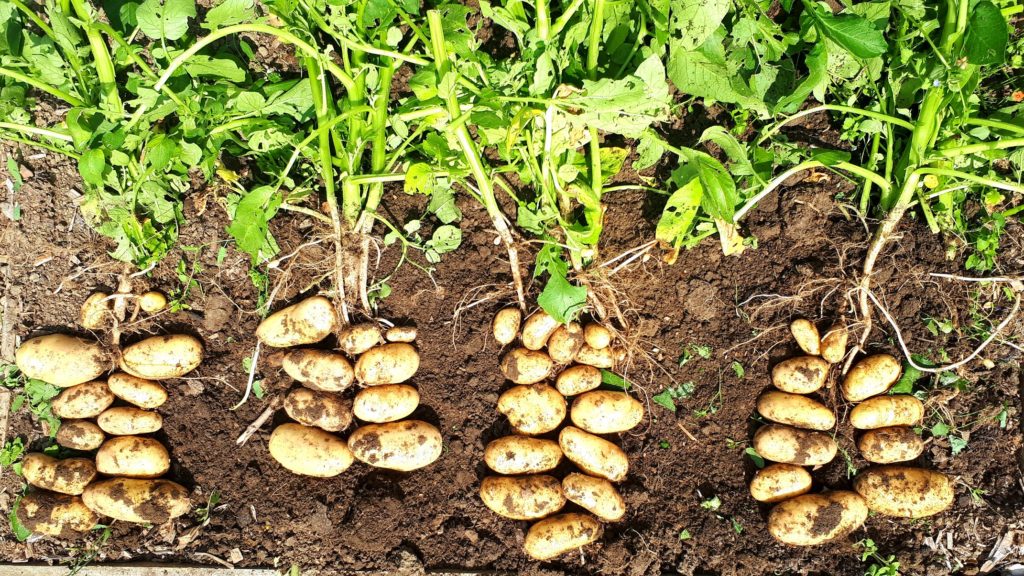 At this time of year onions start as tiny little bulbs called ‘sets’ and are available to buy in bags of 50-100 (or more). Make a small hole, bury an onion slightly beneath the surface. Repeat to make a row of onions (or not as you prefer), distance between them about 15cm / 6 inches. Sow before mid-April for best results, harvest in July/August when the leaves flop over and start to dry out.

I like to grow Centurion or Hercules onions, they’re bigger and tastier. Online stocks are already becoming limited though, so get what you can. Red onions can be more difficult to grow.

Where to buy from? 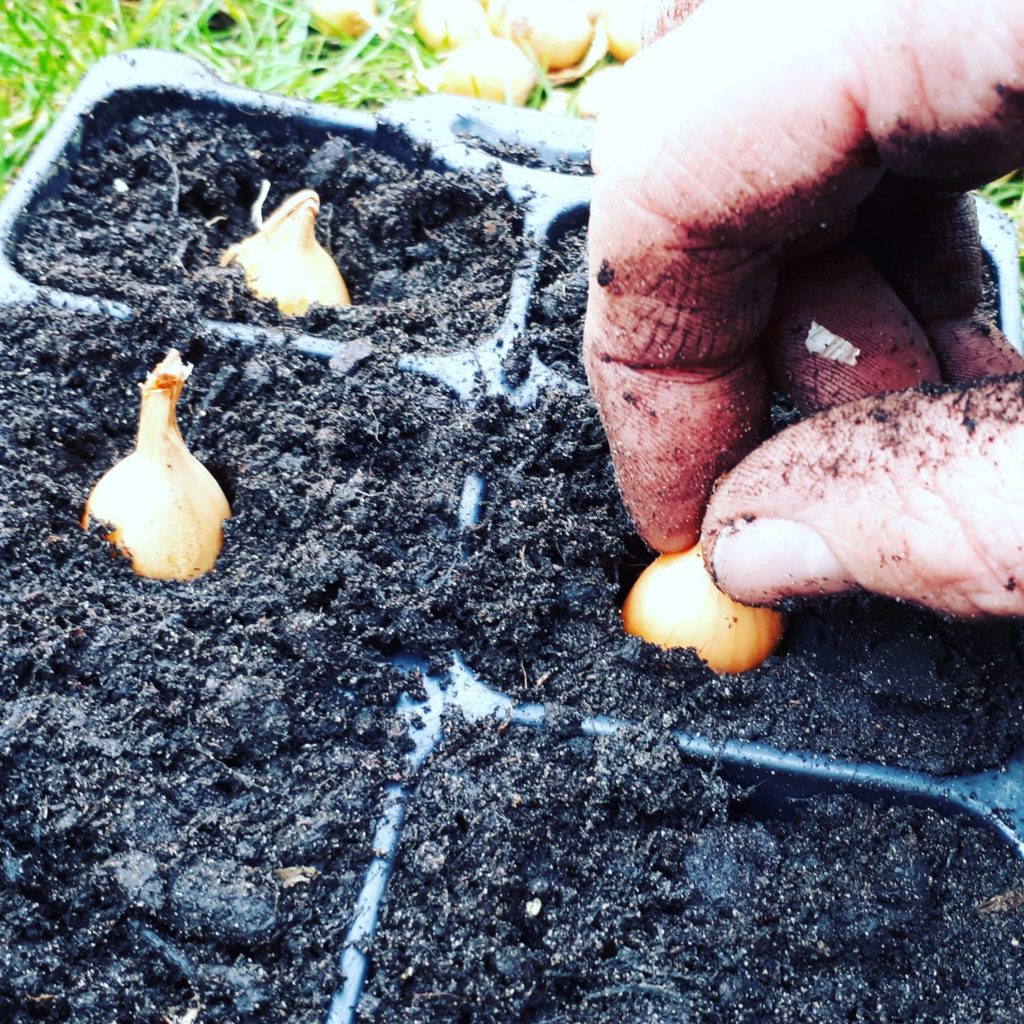 I start onion sets in trays to stop birds lifting them but you don’t have to. 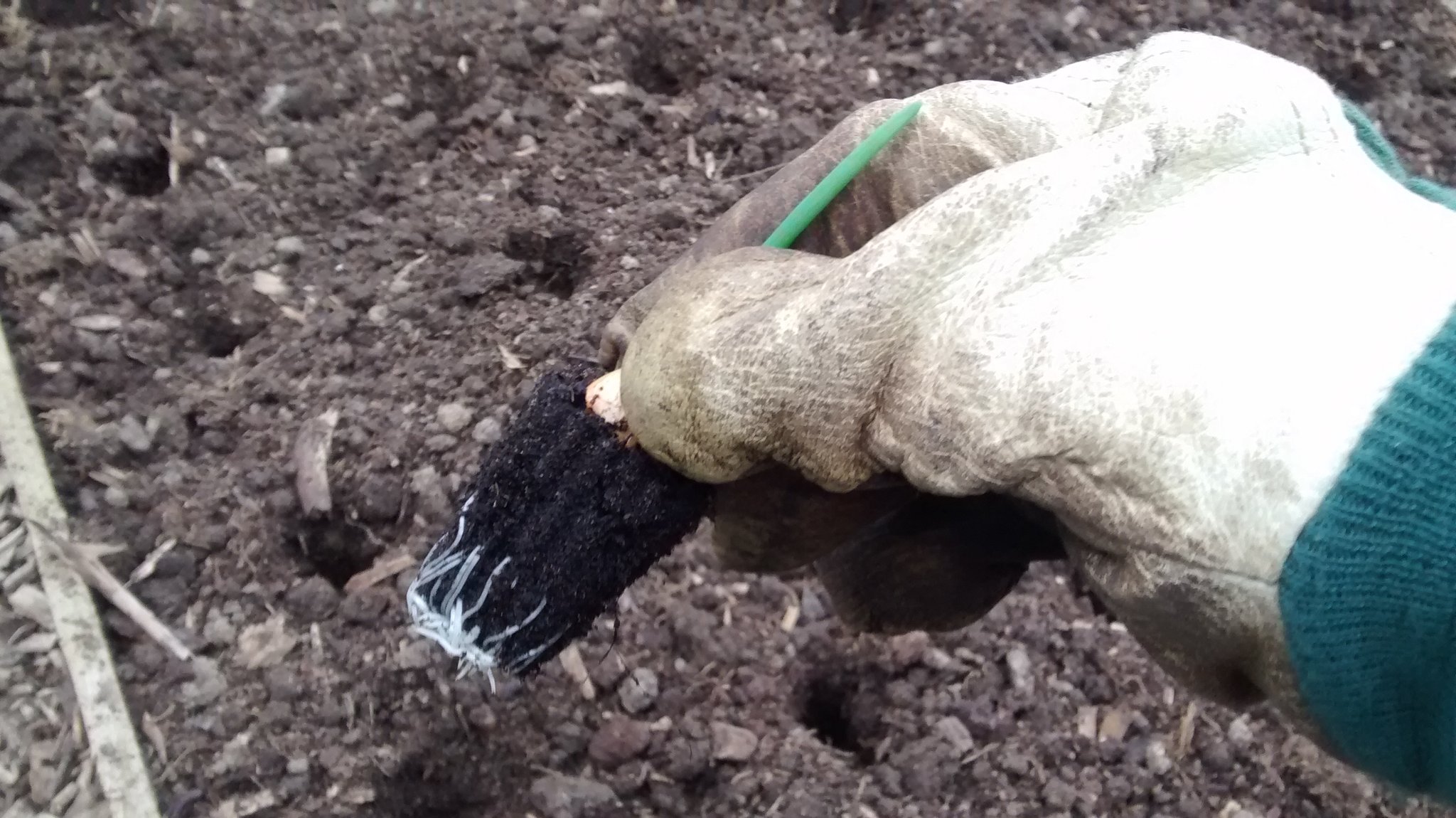 I lift out later 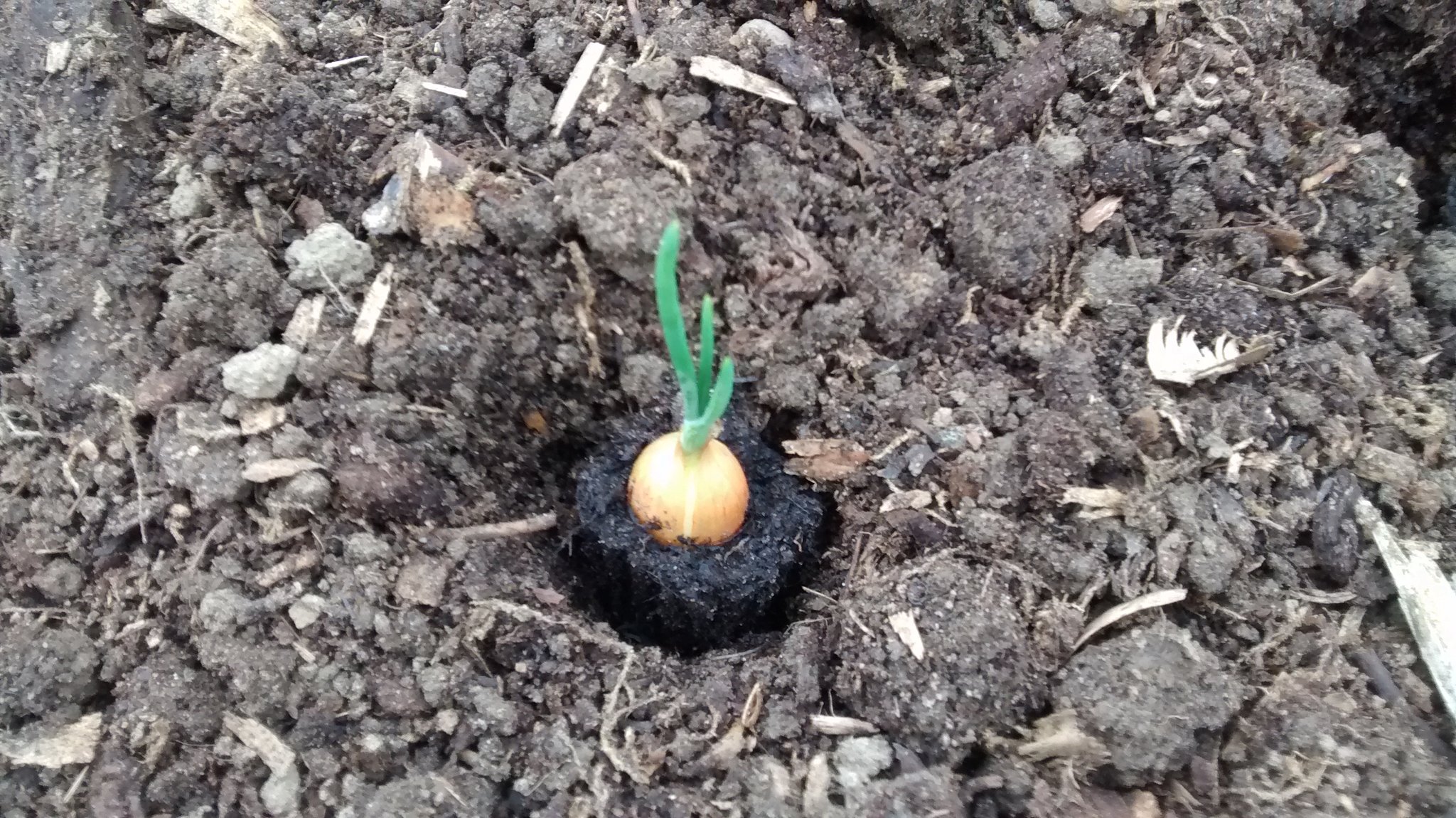 and drop into the ground

3. Vegetable seeds to sow after the frosts (mid-May)

If you have a sunny windowsill inside, or better still a greenhouse, you can start the following crops in pots of compost in mid-April, late frosts will have passed by the time you need to plant them outside in mid-May. Alternatively wait until mid-May and sow directly into the ground but you do run the risk of a slug or snail doing more damage to a small plant using that method.

Fill a deep pot with compost and sow a bean one finger deep. Once the plant is around 15cm / 6 inches tall take it outside and water it well. Make a hole in the ground large enough for the pot (place it in the hole to check). Gently tip the recently watered pot upside down whilst holding the soil end, give it a little tap and a well-watered plant will slide out and retain shape. Pop it into the hole you’ve dug, cover it over and insert a pole or old branch for a support. It’s a good idea to make a wigwam of sticks and sow runner beans in a circle rather than a row. I will be using a garden trellis this year. Runner beans will start delivering crops around August through until October. 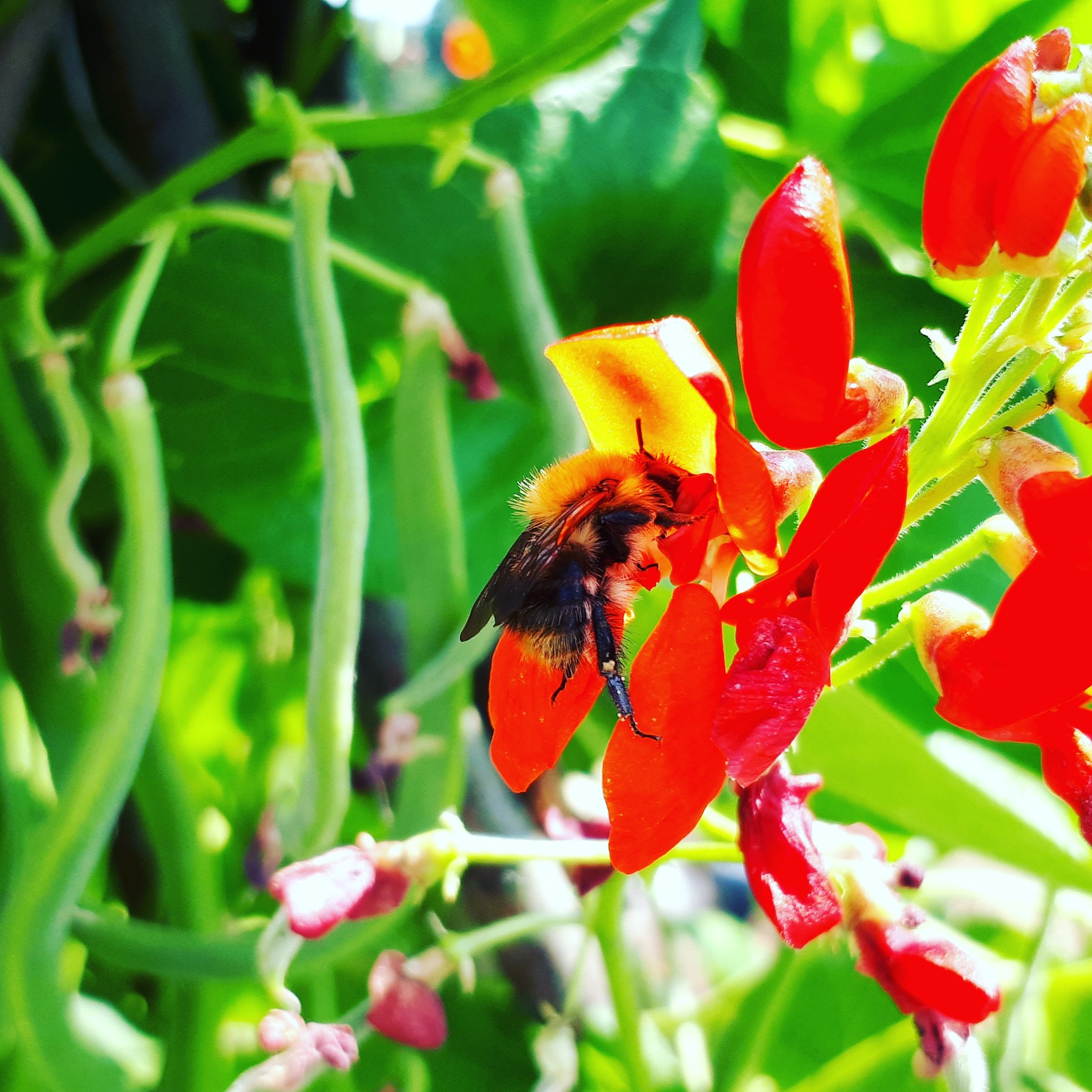 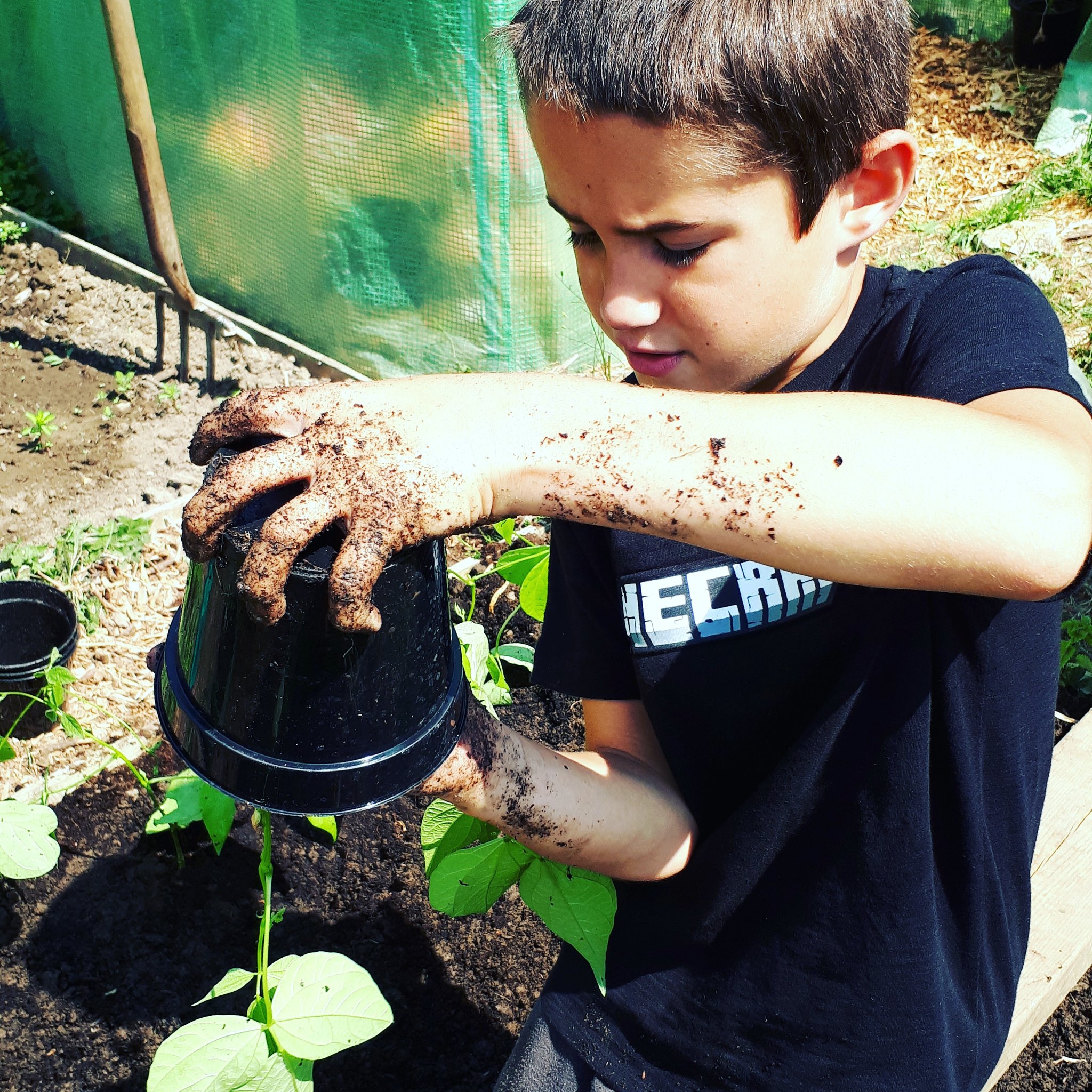 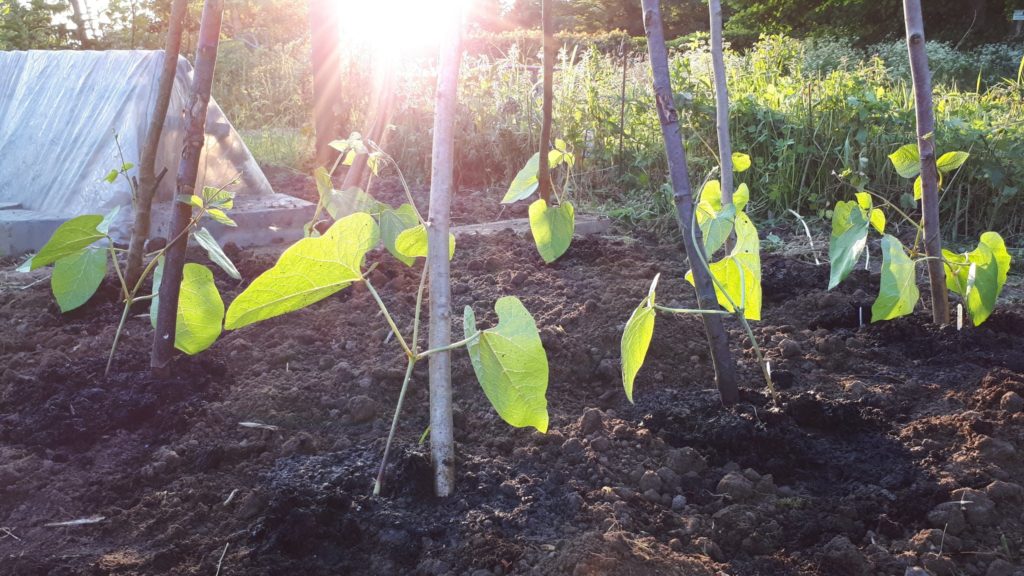 A wigwam of runner beans ready to grow upwards

Use the same sowing method as Runner Beans, just need much shorter growing sticks, but you can actually get away with none. They will flower and produce beans very quickly, much faster than runner beans. Sow crops every two weeks through the summer months and guarantee yourself a steady stream of Dwarf beans which in my experience, children love (less so with runner beans).

Here ‘the boy’ shows you how to sow French Beans (demonstrating how easy it is): 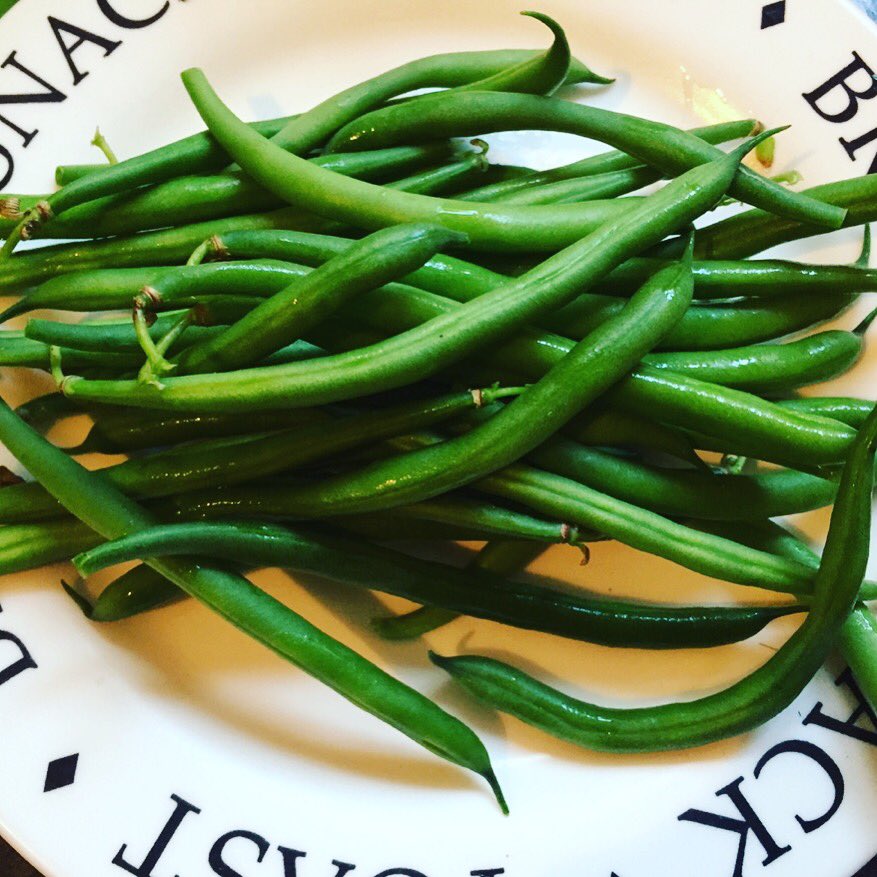 If you can, sow on a windowsill or in a greenhouse, one seed per medium sized pot in mid-April. Place the seed on its edge and push it down just slightly beneath the soil and water it sparingly until two leaves are visible. Keep damp but not wet. After 3 weeks the plant will be a fair size and needs to either be planted out either: 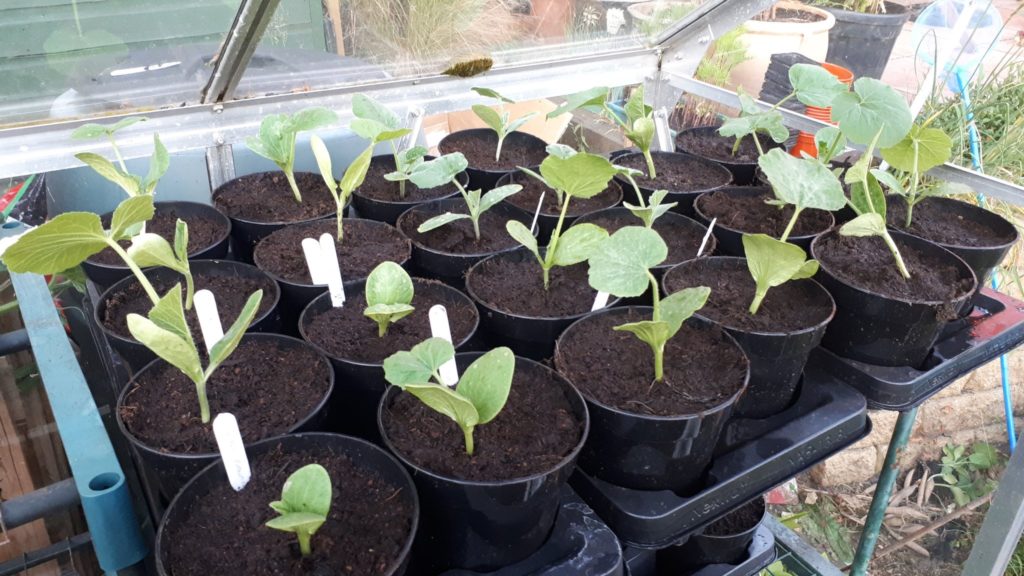 Squash plants ready for planting out

A sunny position is essential for best growth of squashes. One courgette plant is enough for most families and could grow in a large pot. Two and you’ll be passing them over the fence to the neighbours!

Red Kuri squash will produce a trailing vine which can be trained up a trellis or over a greenhouse roof and will give tasty early summer squash.

Butternut squash are quite late to deliver fruits, typically not until October but they keep a long time over winter and will be in very short supply, most are imported. I will be growing mine over the edge of my garden terrace walls and letting them trail over the remaining lawn. 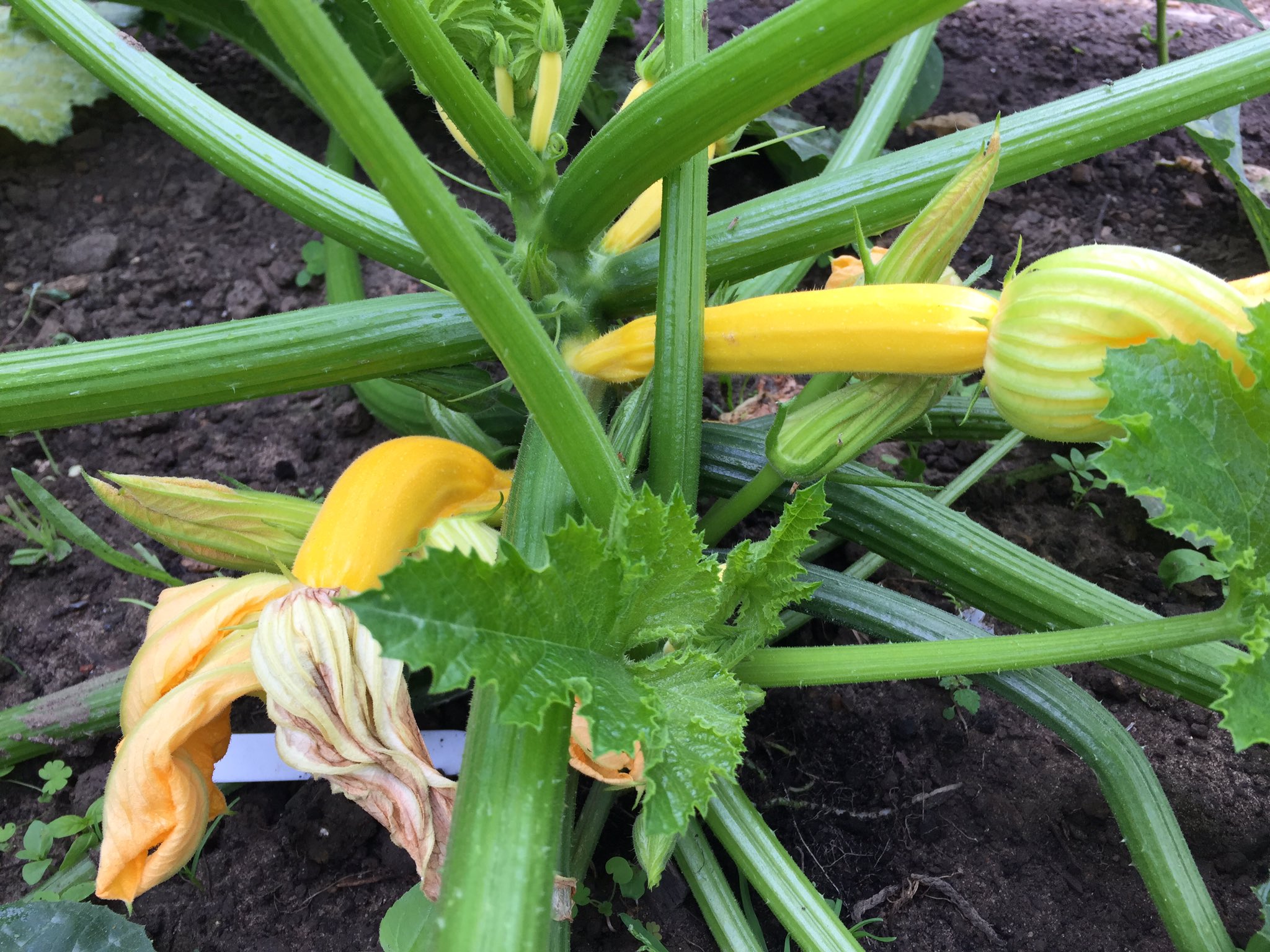 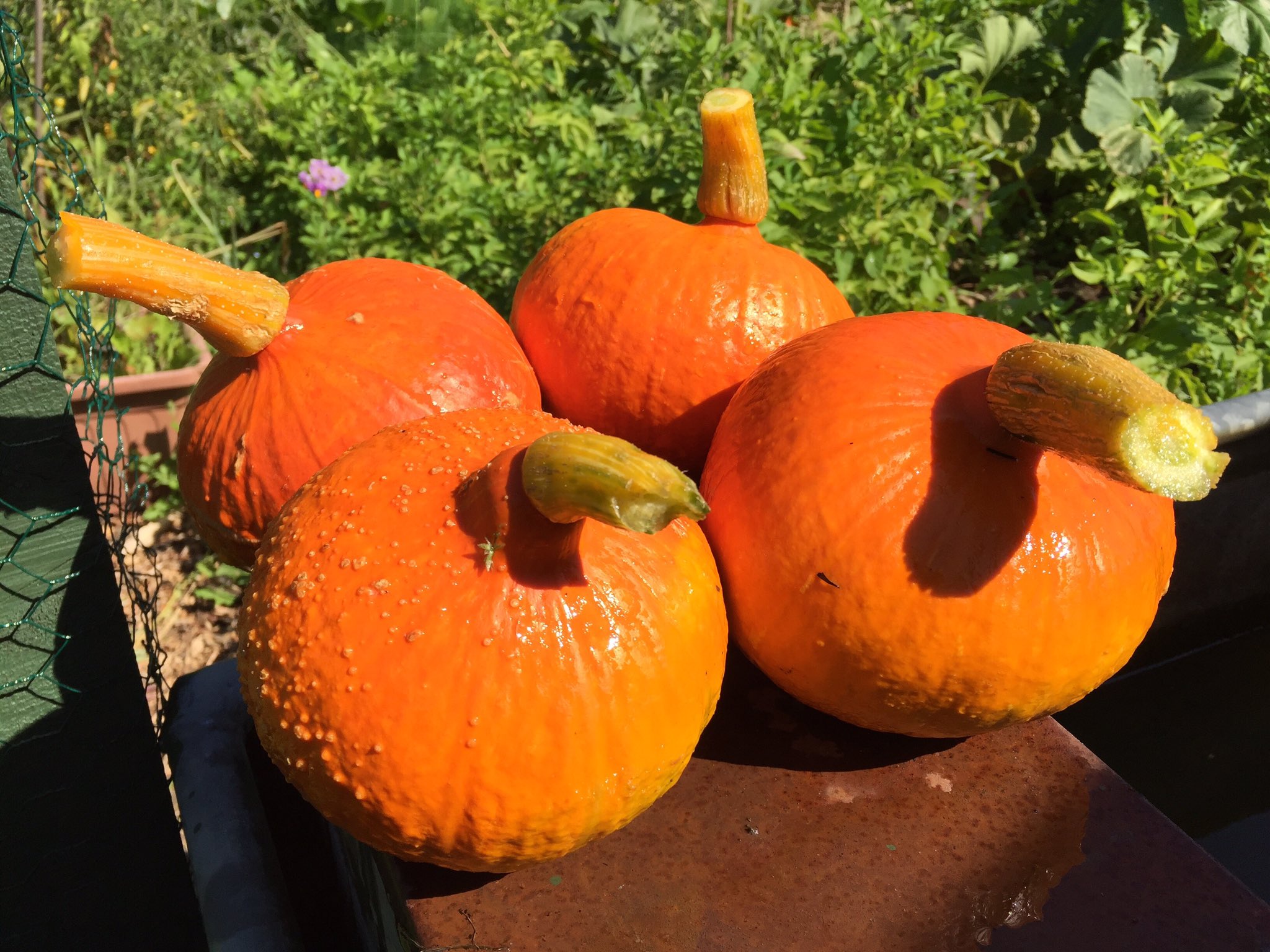 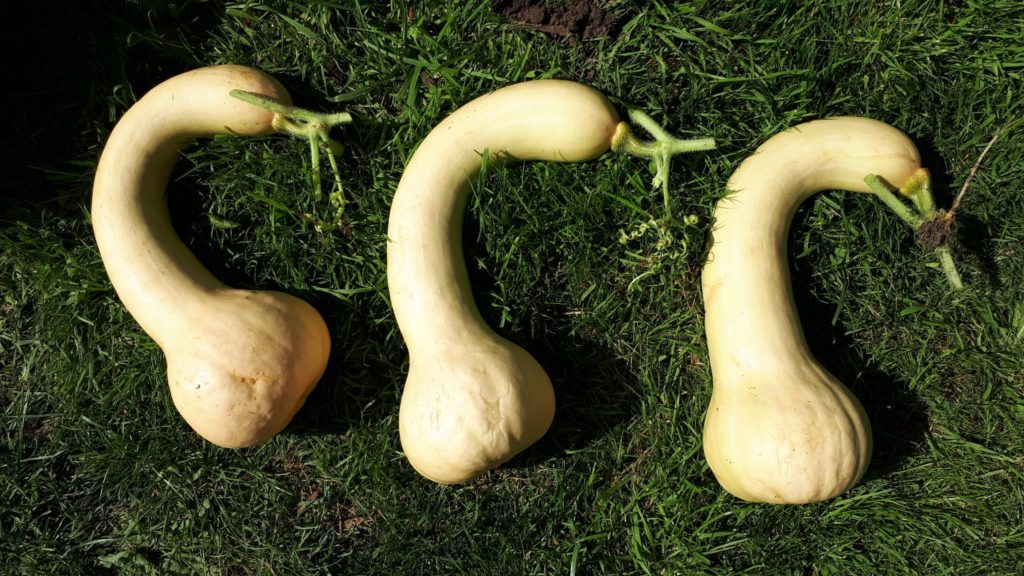 Crookneck Butternut Squash are easier to cook with

If you’re a fan of salad crops you could sow regularly into flower pots to keep a steady supply of lettuces or radishes on the go. Radishes are ready around 3-4 weeks after sowing. You will need to watch out for slugs and snails who often come hunting at 10pm at night (a torch is needed to catch them in the act). Pots are handy because they make it more difficult for the slugs and snails to access them and can be moved about. Surround the pot with copper tape (the kind used for electric guitar shielding) to stop them crossing it. Do not buy the rubbish sold as a copper barrier in garden centres, the copper % is too low and they motor right across (see my previous videos). 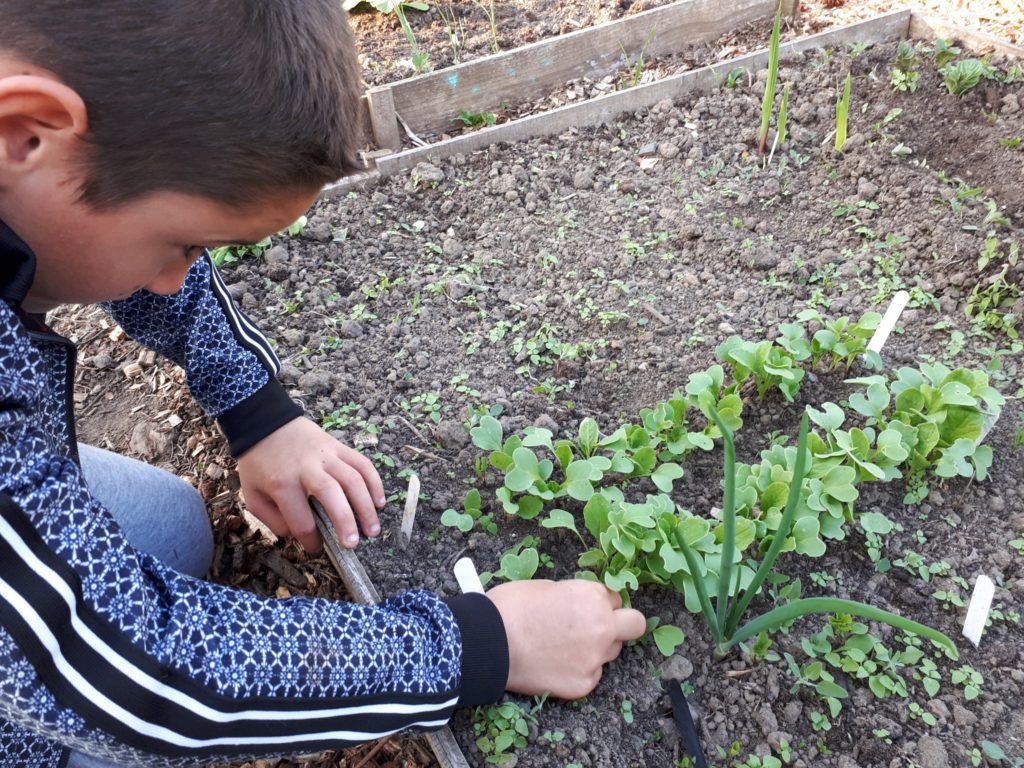 Without a greenhouse and constantly monitored watering solution tomatoes can be more trouble than they’re worth. If you are new to growing your own food there is no better way to grow despondent and give up than to try growing tomatoes. Just as you think you’ve got the knack they get destroyed by blight. It took me a good ten years to perfect the art and now it only works with grow bags in plastic water trays with a drip feeding system inside my greenhouse or polytunnel. I do it, but they are one of the hardest crops to grow well. Focus on the crops above, and they might make a difference to your kitchen and bank balance in 2020.