You are at:Home»Health & Outdoors»How to ripen green tomatoes – ethylene borrowing

In an ideal world we’d obviously like our tomatoes to ripen the best way, on the vine. You’ve spent half a year getting them from seed to fruit, pinching out the side shoots, tying them to supports, watering and feeding daily, now you want to taste the juicy rewards! But there’s a problem, there are hundreds of tomatoes and they’re all stubbornly GREEN. None of them are turning red. Then it gets worse, the weather hits a cold autumnal spell and the first few that show any hint of ripening fall off in a partially ripened state. How can you speed up the tomato ripening process? How do you ripen the fruit that have fallen off the vine?

The good news is that tomatoes are known as a ‘climacteric fruit’ this means that they continue to ripen when they are removed from their host plant (or vine). They do this by producing their own invisible gas inside the fruit called ethylene which converts carotenoids into red lycopene pigments. Ethylene is produced more easily inside a tomato at warmer temperatures, so placing a partially ripened tomato on a sunny windowsill works by warming the fruit so that it stimulates faster ethylene production. At a basic level this can be enough to ripen a partially ripened tomato, especially a small one. Placed in groups, tomato ripening will be even more successful. It also becomes clear why a greenhouse is likely to ripen tomatoes more quickly than outdoor grown crops.

What if you want to do more to speed up the tomato ripening process? Maybe you’ve had some kind of horticultural disaster, the plant has died leaving you with green fruit? An option might be to borrow ethylene from other climacteric fruit. In addition to placing your unripened tomatoes in a warm place, you could accompany them with any of the following fruits which are busily giving off their own natural ethylene gas:

Placing them together inside a paper bag would be even better as it would trap the ethylene gas and slow down its escape into the air. Bananas are a commonly known climacteric fruit associated with tomato ripening, I’ve even tried placing bananas in the greenhouse alongside tomato plants with some success. Generally however, I find plums and kiwis much better ethylene donors for ripening tomatoes inside the home, but use whatever you can find, most people have some bananas. 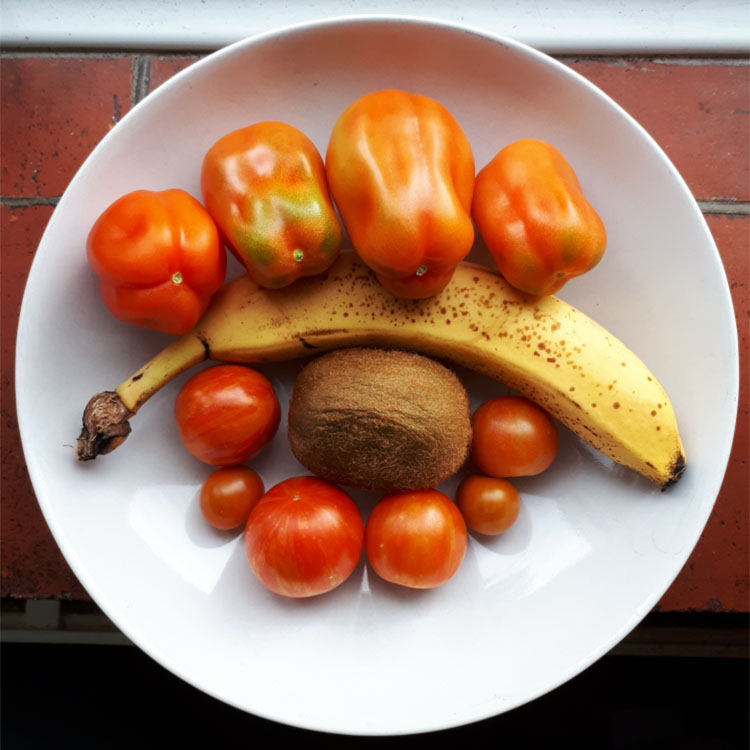 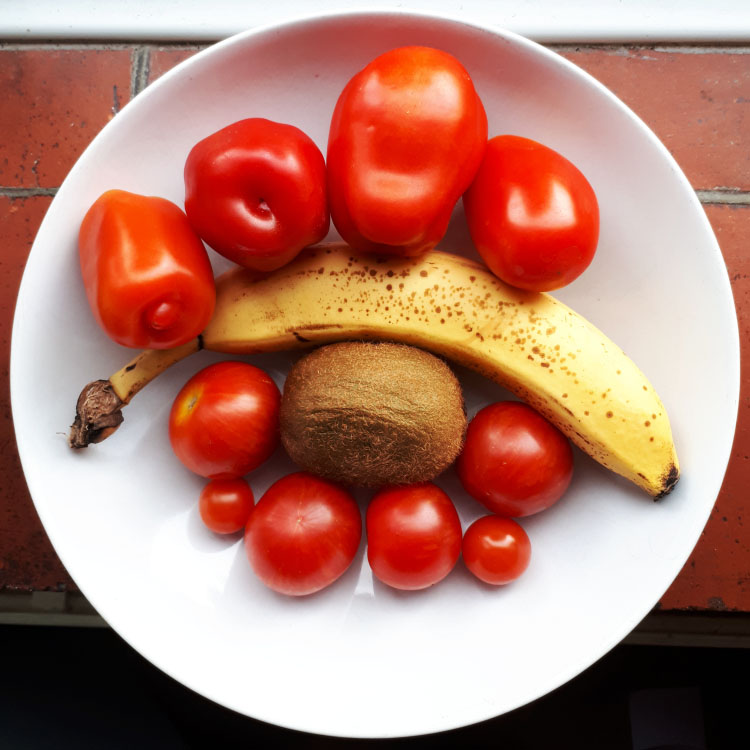 Ripening after a tomato blight attack

If you are dealing with a case of tomato blight I share your pain and disappointment. You will find separate paper bags of washed and dried tomatoes each containing their own plum or kiwi increases your chances of getting any tomatoes to ripen. Just don’t dry them all with the same cloth, let them air dry. Once the blight fungus is about it only takes one fruit to contaminate the whole batch hence the need to separate them into groups (and possibly also different warm locations).

Flowers and the Fruit Bowl

Once understood, it is clear that this process of ethylene borrowing is very easily done accidentally within a fruit bowl. When placed together all of those fruits listed above will ripen each other. Ethylene production decreases massively at lower temperatures, which is why it’s better to keep fruit separately inside a fridge to extend their lives than on a sunny dining room table in a group. Furthermore flowers such as dahlias and carnations are equally sensitive to ethylene and their cut blooms won’t last as long in a vase placed beside a fruit bowl. Flowers like tulips and daffodils are not sensitive to ethylene at all, which is why they tend to last much long inside the home.

Much climacteric (self-ripening) supermarket fruit travels thousands of miles to us from warmer climes. You can imagine that this causes some logistical issues for the fruit growers, how do they get fruit to the UK without it spoiling in transit? Well, some fruits like bananas are harvested green and exposed to ethylene gas at the end of their journey to make them yellow and ‘shop ready’. Refrigeration obviously helps to reduce natural ethylene production too. Special electric warehouse forklift trucks have to be used because diesel emissions contain ethylene which would also ripen the fruit being stored (if driven inside a building).

The main industry solution is the ethylene inhibitor. A man made gas which counteracts the effect of ethylene inside fruit. One of them 1-Methylcyclopropene (1-MCP) is applied to fruit (largely apples) and flowers and sold commercially as SmartFreshSM into the fresh produce industry or as EthylBlock into the floral industry. The other, Aminoethoxyvinylglycine (AVG), is sold commercially as ReTain and acts as a plant growth regulator by blocking the production of ethylene in the plant tissue. It is sprayed onto the fruit, usually a few weeks prior to harvesting. I find the latter rather worrying as AVG is classified as hazardous (according to NOHSC Approved Criteria for Classifying Hazardous Substances) based on its inhalation toxicity and reproductive and developmental effects observed in rats… another vote for growing your own produce!