It’s a well known fact that Albert Einstein was a big lover of an apple wassail, it’s how he came up with the ‘Apple Wassail Equation’ which made him so famous:

Yes OK I AM obviously pulling your leg, but in so doing giving you the simplest description of what apple wassailing is. Apple wassailing is a very old traditional ceremony (at least Elizabethan) undertaken to wake the apple trees in an orchard and banish evil spirits for the growing season to come. Think of it as a harvest festival thanks-giving event of fruit yet to be grown. Traditionally it’s more of a southern and south-western past-time among those English communities and villages more widely associated with apple harvesting and cider brewing.

Why the word ‘wassailing’? 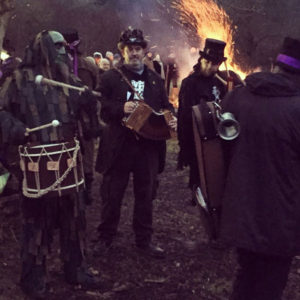 The Vikings used to drink to good health with a cry of “Ves Heill!”, the Old English phrase became “Wass hal!” and hence we now have the word ‘Wassail’. Typically an apple wassailing event begins with a procession from a local landmark (usually a pub) through a village to the local community apple orchard. The procession is lead by a wassail king and/or queen and they are typically dressed in something that resembles Pagan costume (or that of the BBC period drama Poldark). The queen is often picked by the wassail king from the attending crowd, these ‘wassail royals’ then lead the marching crowd to the orchard. With cries of “Wassail!” the following throng of people reply “Wassail!”. All to the marching beat of a drum and sometimes bearing flaming torches (if the local health and safety representative is not around to do anything about it). 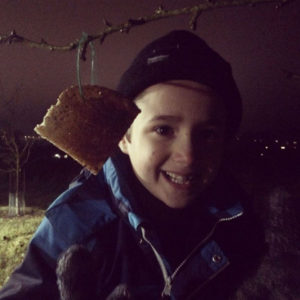 The boy hanging cider toast on an apple tree

Once at the orchard there is usually cider, a bonfire (conveniently made of apple tree prunings) and some traditional music and singing to bring good luck, often involving local Morris Dancers. This is followed by a ceremony whereby a pagan incantation is uttered around a bonfire and wassail attendees turn to face the compass points and ask the elements for their assistance with the fruit growing year ahead. After this, cider soaked dried toast is hung on the branches of the apple trees to protect them and bring them luck. Sometimes cider is poured over the roots of the trees as well… purely a symbolic act, it’s not a secret fertiliser recipe.

This all sounds very Wicker Man? 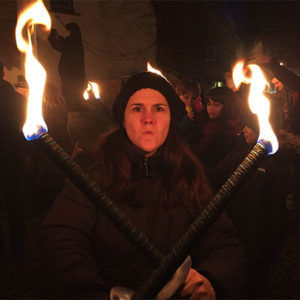 A very scary Pagan MrsGrow (hat NOT on fire)

When marching along a street in a mass of several hundred people bearing flaming torches it feels even more like you’re taking part in the Wicker Man film. I’m really not sure what the oncoming drivers make of it if they’re passing through, frankly I’d be rather petrified! I must admit that I hadn’t ever heard of wassailing before I became an allotmenteer. Now however apple wassailing is something we enjoy as a traditional family activity each year. There aren’t many things one can enjoy as a family outside after 4pm in January because it’s still too dark, a pagan ceremony with cider, singing and morris dancing seems to tick that box nicely though.

We’ve a double bill of apple wassailing coming up in the Dorking and Redhill area in 2019.

We like apple wassailing so much that we’re attending both events. Come along, the more the merrier! At Outwood you might even find Dame Judi Dench hiding in her local orchard singing to the trees.

A-wassail, a-wassail throughout all the town
Our cup it is white and our ale it is brown
Our wassail is made of the good ale and cake
Some nutmeg and ginger, the best you can bake