“Is it Wednesday? Wednesday, Four O’Clock?” was a question I spent most of Saturday afternoon asking. I asked it of people on Dorking High Street as they shopped and I asked it of visitors to Dorking Christian Centre. Why was I asking such a ridiculous question? Well, because I was dressed as the Mad Hatter for the 10th Annual Mole Valley Squash and Pumpkin Show and this year’s theme was ‘Alice in Pumpkinland‘. If you’re going to dress up as a character you need to play the part I think, even if your eldest keeps telling you that you’re an embarrassment for taking it too far… “Dad please stop it or I’m going home”.

I’m not sure many pumpkin shows are themed, but Dorking’s show is not just about the allotmenteers exhibiting their produce, it’s also about putting on something fun for families and the local schools. Ours is an event that helps to promote allotments, horticulture and grow you own, it brings together the community at large as well as the allotment holders spread across the five sites of Dorking. We also include themed art exhibits as part of the show as part of the ‘Arts Alive’ programme. Yes we love our pumpkins but I think most of us on the committee accept that on their own, pumpkins are not particularly exciting to those outside of the allotment scene, hence the need to add some glamour. It’s also helpful if you’re going to drum up visitors by parading in costume along the High Street handing out promotional flyers. 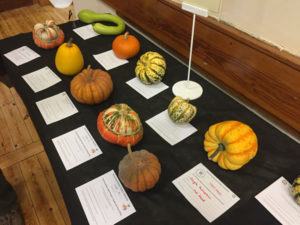 Visitors to the show are of course presented with a huge variety of squashes and pumpkins entered into 19 different categories and classes, this year an unexpected visitor from afar (Bracknell) brought something spectacular for the ‘Heaviest pumpkin’ category. So big was his giant pumpkin (estimated 600lbs as per photo above) that we couldn’t actually get it into the show hall and consequently it remained outside on a trailer. I was told by a passing cyclist that it was partially blocking little used “cycle route 22” but given that cyclists shut down our local villages for an entire day each year the inconvenience to one cyclist seemed a small price for her to pay for such a joyful community event. 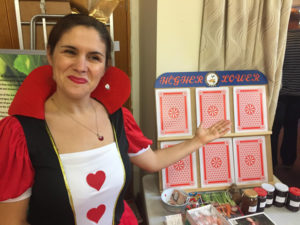 MrsGrow is the Queen of Hearts

The cafeteria (or tea party) was very busy with customers drinking tea or eating lasagna, curry, jacket potatoes, pumpkin soup, chocolate brownies and / or pumpkin pie. I enjoyed wandering the cafeteria exclaiming “There’s no ROOM, there’s no ROOM!” in true Mad Hatter style. In the main hall my daughter (dressed as Alice) organised a free treasure hunt for children – allowing them to hunt amongst the exhibits for playing cards in exchange for a small treat at the end. Meanwhile MrsGrow was dressed as the Queen of Hearts and I assisted her in running the ‘Higher or Lower’ game (Brucie style) where players could win homemade jam or a choice of pumpkin from our sale table. The adjoining room offered free face painting and some paper mache pumpkin decorating activities for children.

Putting on a pumpkin show is no easy task, it takes organisation and that’s where Richard comes in. Richard is the force behind the show and he’s not bad with woodwork either – turning his hand to numerous themed accessories and staging materials each year. Others put hard work into transporting tables borrowed from local schools, putting up promotional signage, designing flyers, helping to decorate the rooms, preparing food and/or serving it in the cafeteria, all for free. Like an allotment plot, the show is not run for profit, as long as Dorking Allotment Holders Association‘s costs are covered then we’re happy.

How did my exhibits do this year? 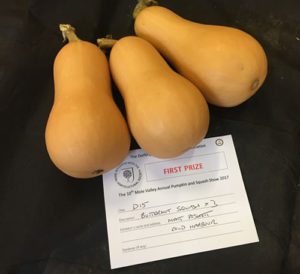 My Butternut Squash, two 1sts and one 2nd

As with Westcott flower show, 2017 was my best showing yet; three firsts (a pair of Connecticut Field pumpkins and pair and trio of Butternut squashes), three seconds and three thirds. I’m not sure it’s enough to claim the overall points total but I think I’ve probably taken the most points from the three Butternut squash categories which might deliver me the new hand-carved Butternut trophy (I’ll find out at the AGM in November!). Next year’s theme remains a TBA, could it be Jurassic Pumpkins, Pumpkins of the Caribbean or James and the Giant Pumpkin? We’ll find out next year, for now I think most of us are enjoying the welcome rest that follows the pumpkin growing and showing season!