When we moved into our home there were a few rhododendrons and azaleas dotted about in the small front garden. I very quickly relegated them all to an inconspicuous corner because I’ve just never been a big fan. My father always struggled to grow rhododendrons at home and I’ve always found them to be a bit hit and miss, varying between unexpected floral beauty and winter blackened non-blooming disappointment. However, following a very recent visit to the newly reopened Leonardslee Gardens near Horsham (West Sussex) all this has changed. I’ve been inspired. Never in my life have I see so many azaleas and rhododendrons in bloom together, the effect was truly stunning. Furthermore I discovered a connection of plant passion between Leonardslee’s late 19th century owner (Edmund Loder), my great grandfather and me. On some small level Loder could very well be responsible for the existence of my own garden, allotments and this blog. Yes really. That was a surprise.

As a probationary member of the Garden Media Guild I joined up with other GMG members on a special pre-arranged visit to Borde Hill Gardens (Haywards Heath) which was followed by a trip to nearby Leonardslee Gardens. We were absolutely spoiled by Borde Hill’s owners Andrew John Stephenson Clarke and his wife Eleni, with a tour of their wonderful gardens and home followed by a VERY generous lunch. I didn’t think the day could get any better and, given that the entrance to Leonardslee still had a little building work in progress, on arrival I wasn’t overly optimistic about what I’d find inside. How wrong I was!

Leonardslee’s Head Gardener, Ray Abraham (who I swear was separated at birth from one of my allotment neighbours) gave us a potted history of the estate and then took us all on a tour. A small iron gateway between some tall conifer trees quickly transported us to a hidden treasure trove of shapes and colours. Azaelas and rhododendrons planted into a rock garden in such a way as to overwhelm one’s visual senses. Self-sown primroses, ivy and ferns peeking out from crevices beneath boulders. A tucked away hidden paradise akin to an explosion in a paint factory. I would be hard pushed to tell you of a garden experience that has come close to giving me the instant impact of Leonardslee’s rock garden. Possibly the vivid blue pool in the jungle garden at the Lost Gardens of Heligan but why compare? The best gardens are unique. 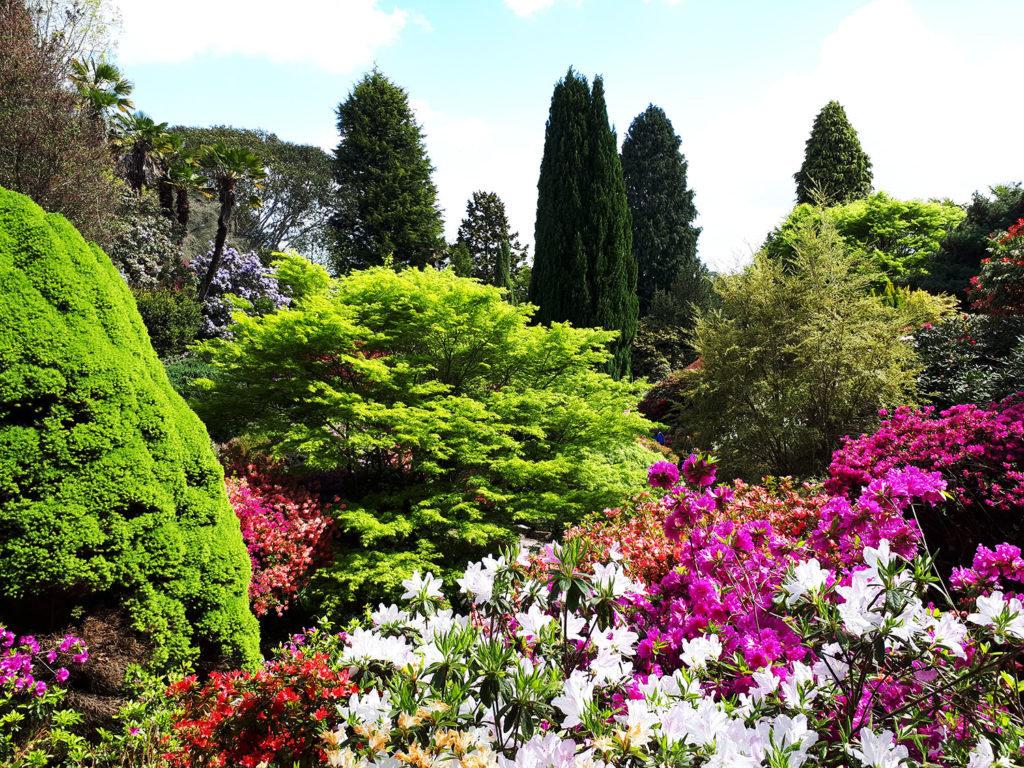 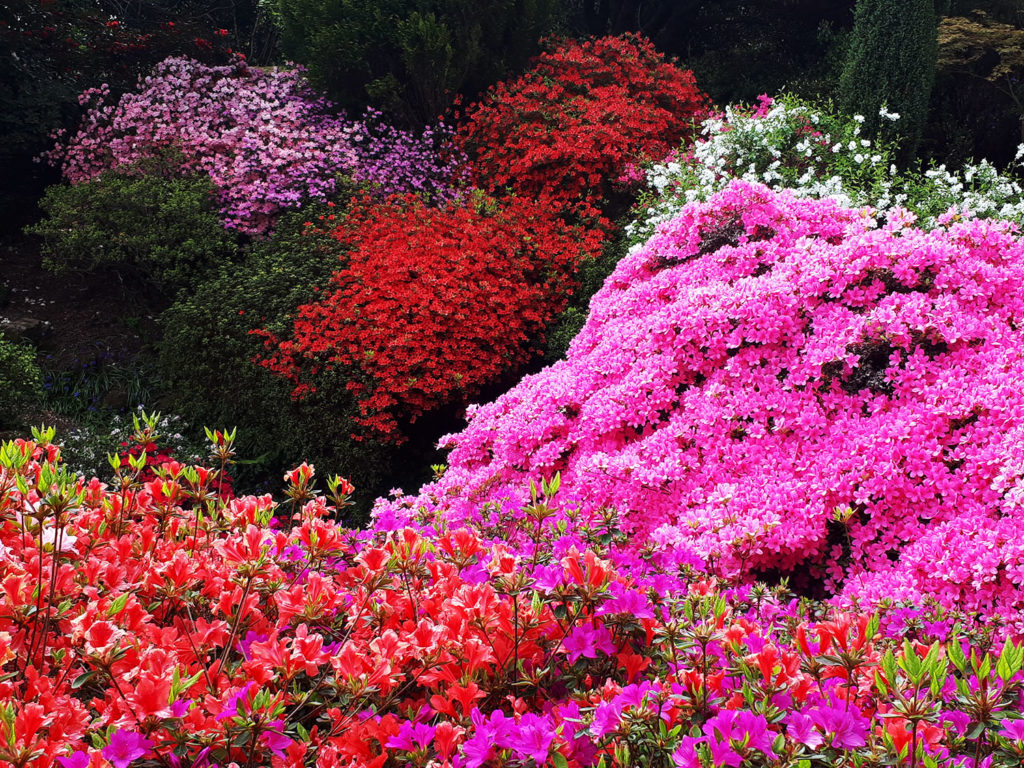 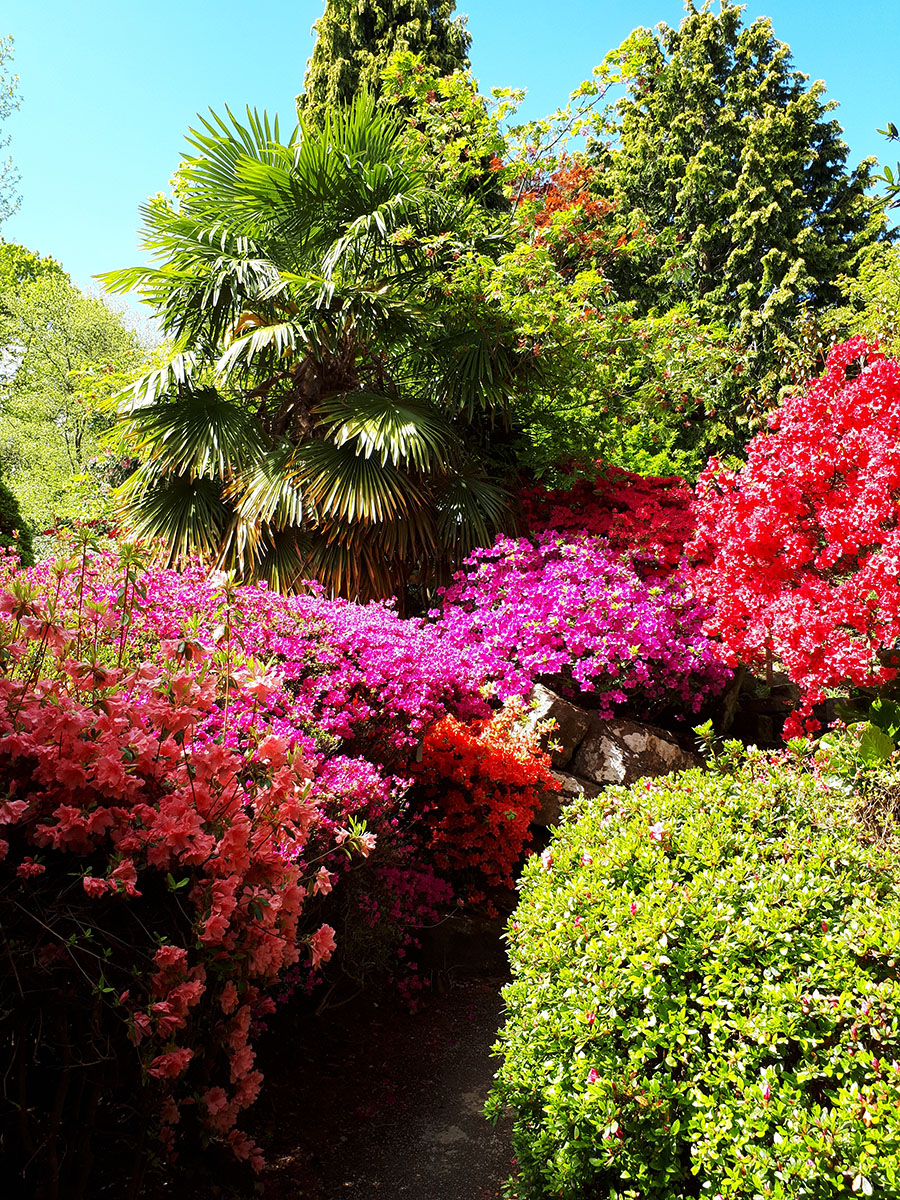 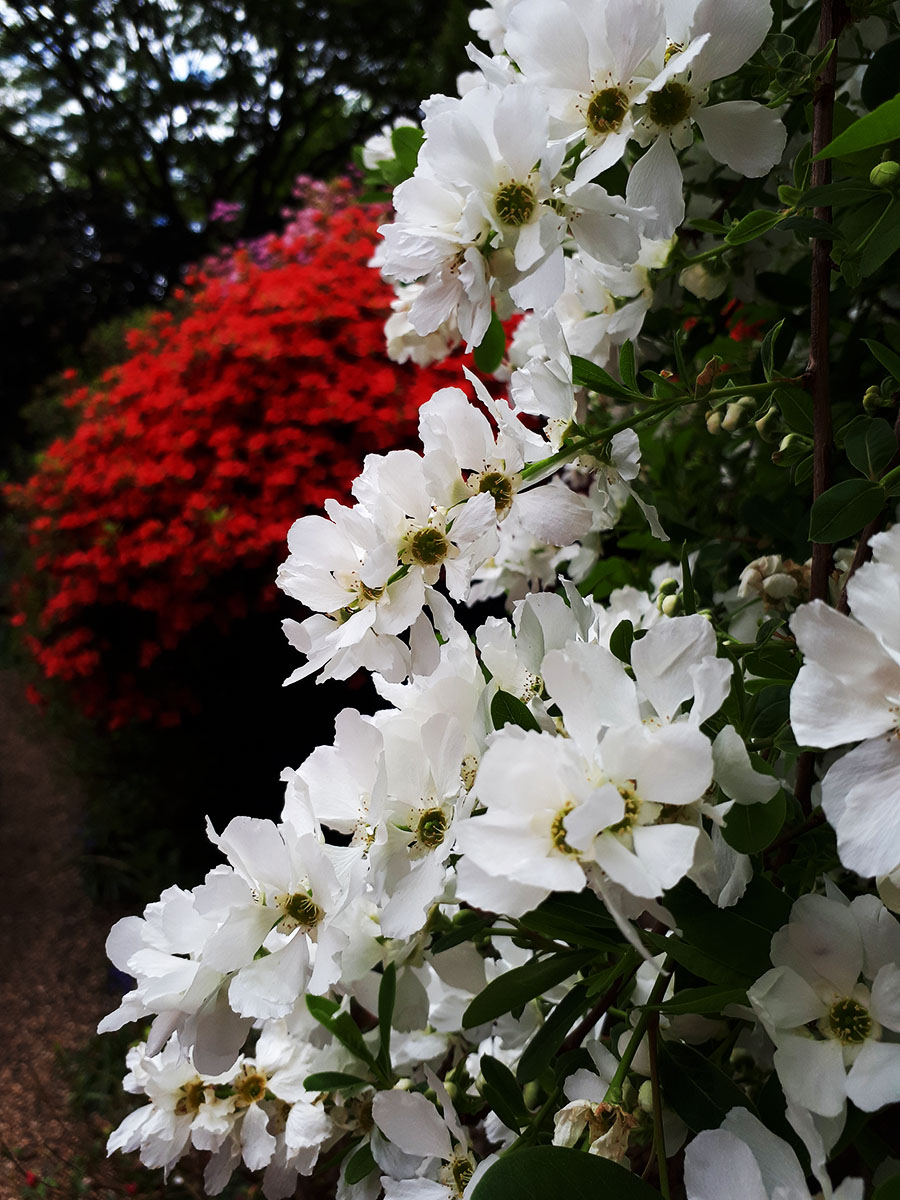 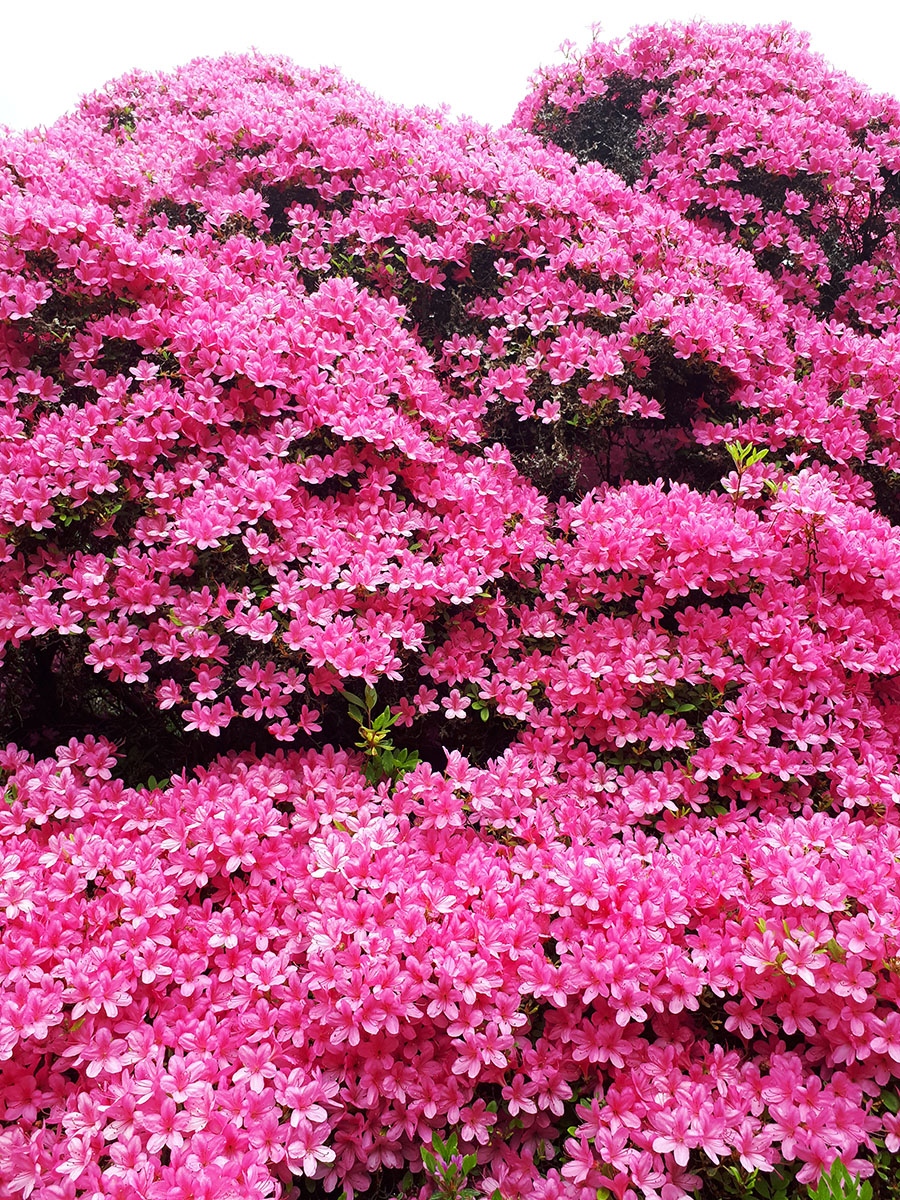 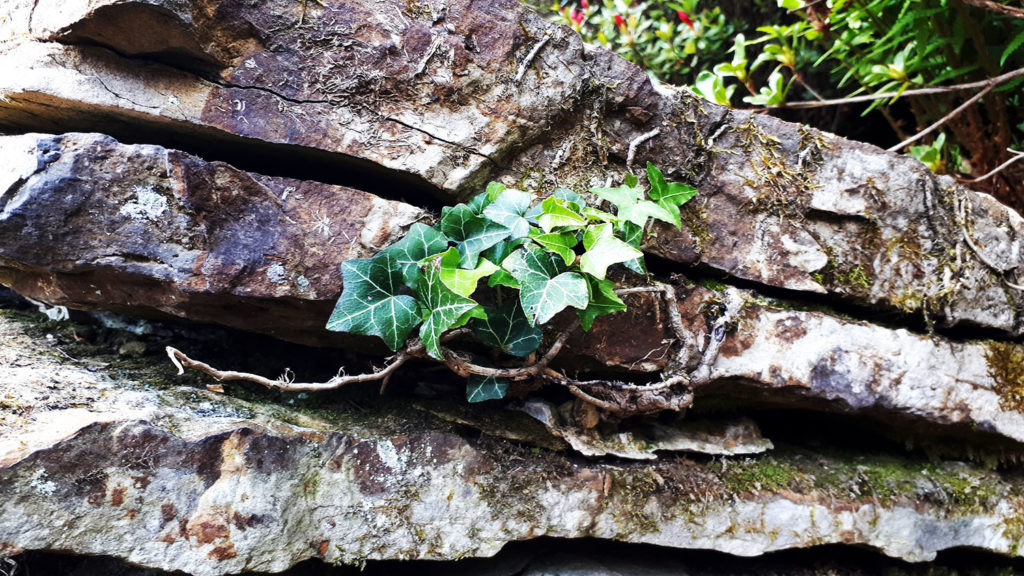 From the rock garden we proceeded around the northern part of the woodland trail through a sea of rhododendron trees, some of them easily reaching the height of a house. Corals, pinks and even blue flowers line the trail and the scent was incredible. Leonardslee had been sold and closed to the public in 2010 and left to grow wild. Following new ownership (Penny Streeter OBE) and plans of revival, Ray Abraham and his team have been restoring the gardens, discovering numerous rare varieties, over one hundred of them on the extinction list. Ray is extremely passionate about rhododendrons and I think Edmund Loder, the rhododendron obsessed owner responsible for the creation of many unique hybrids in the late 19th and early 20th centuries, would very much approve of his guardianship. 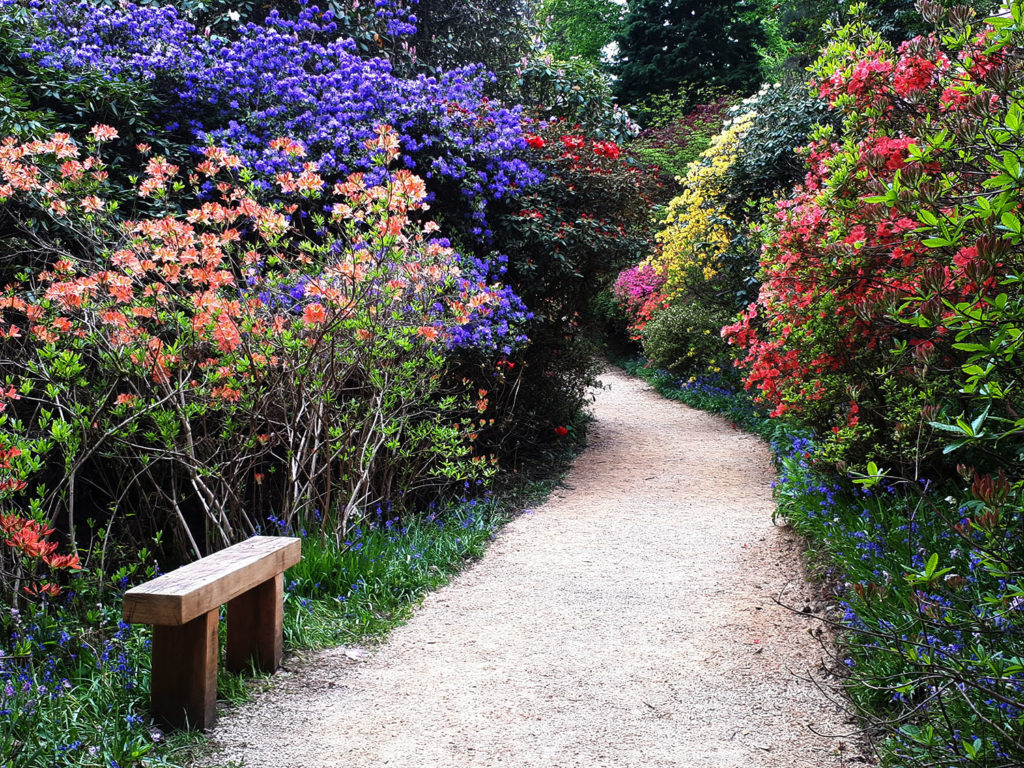 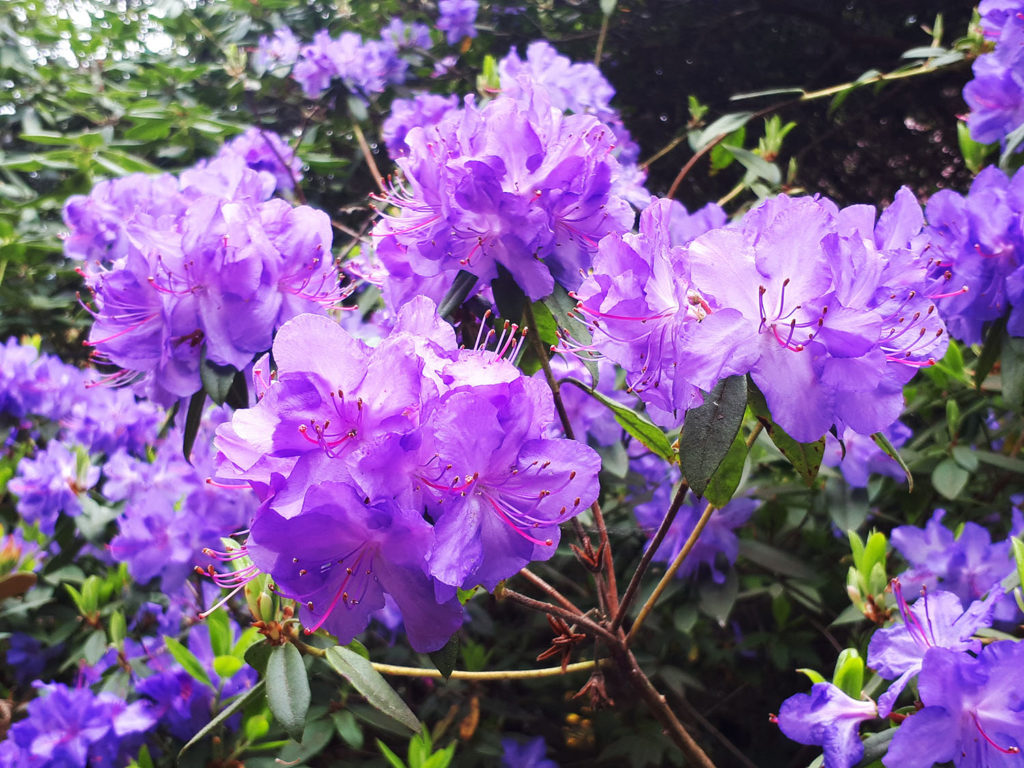 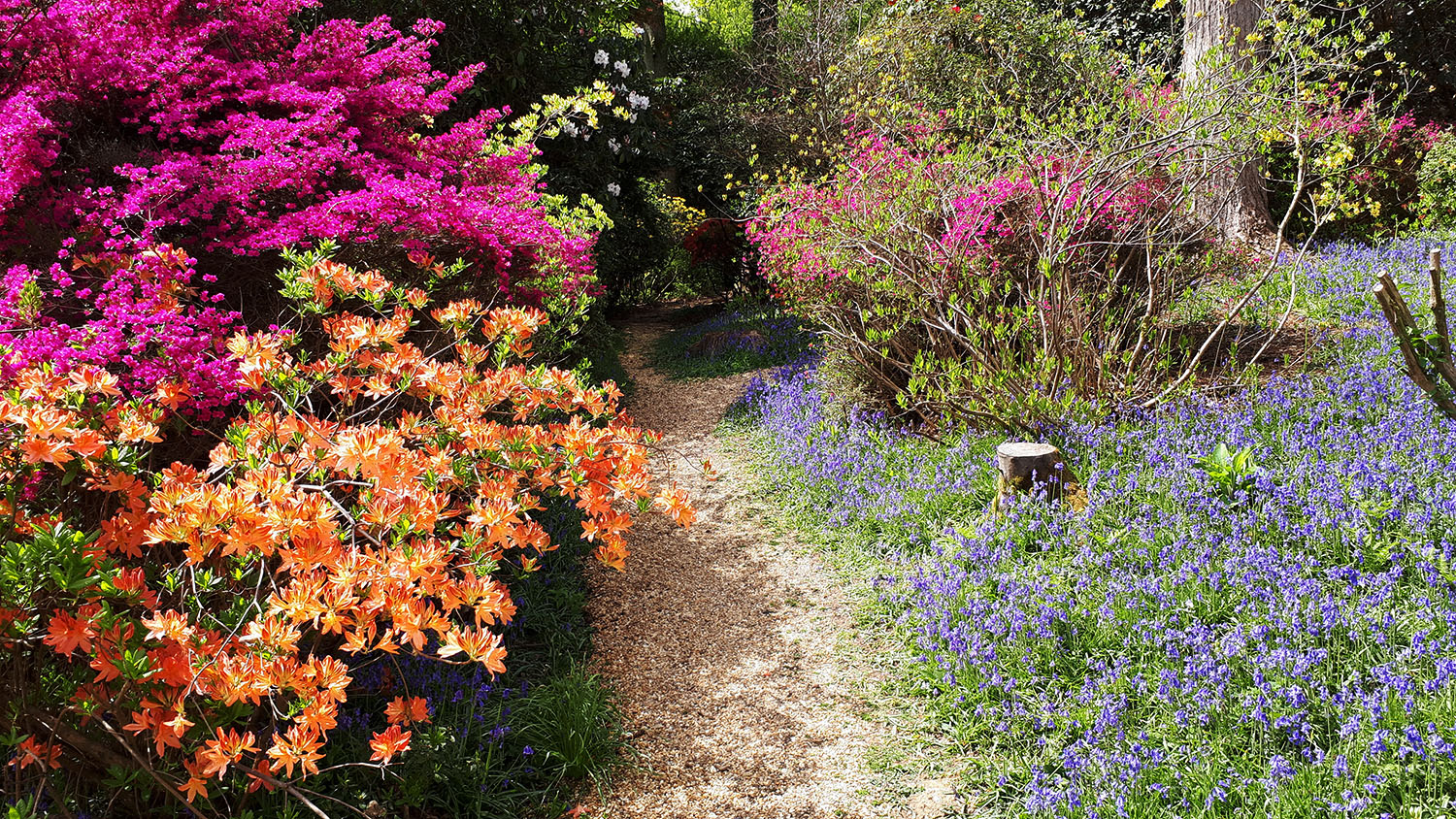 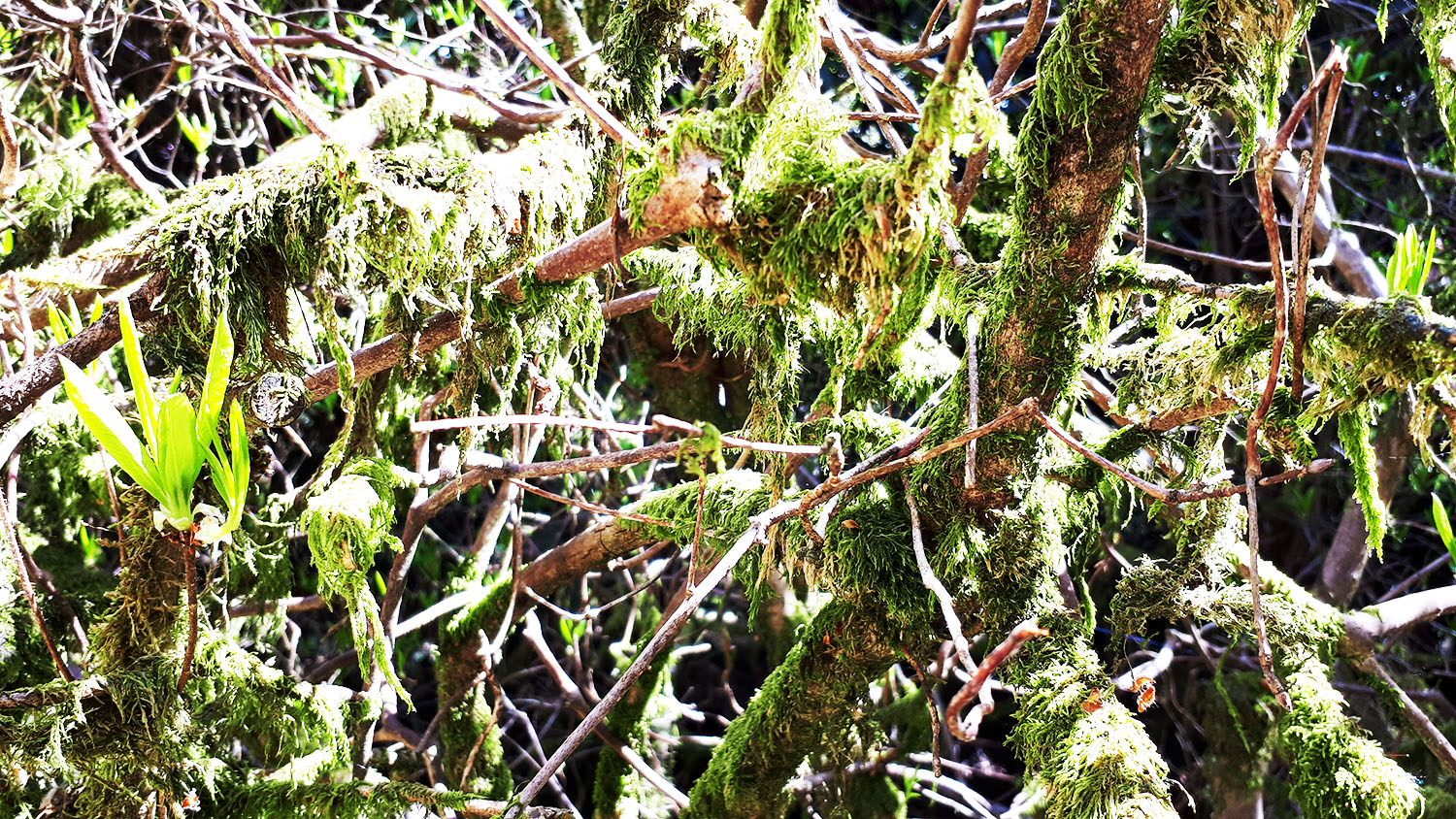 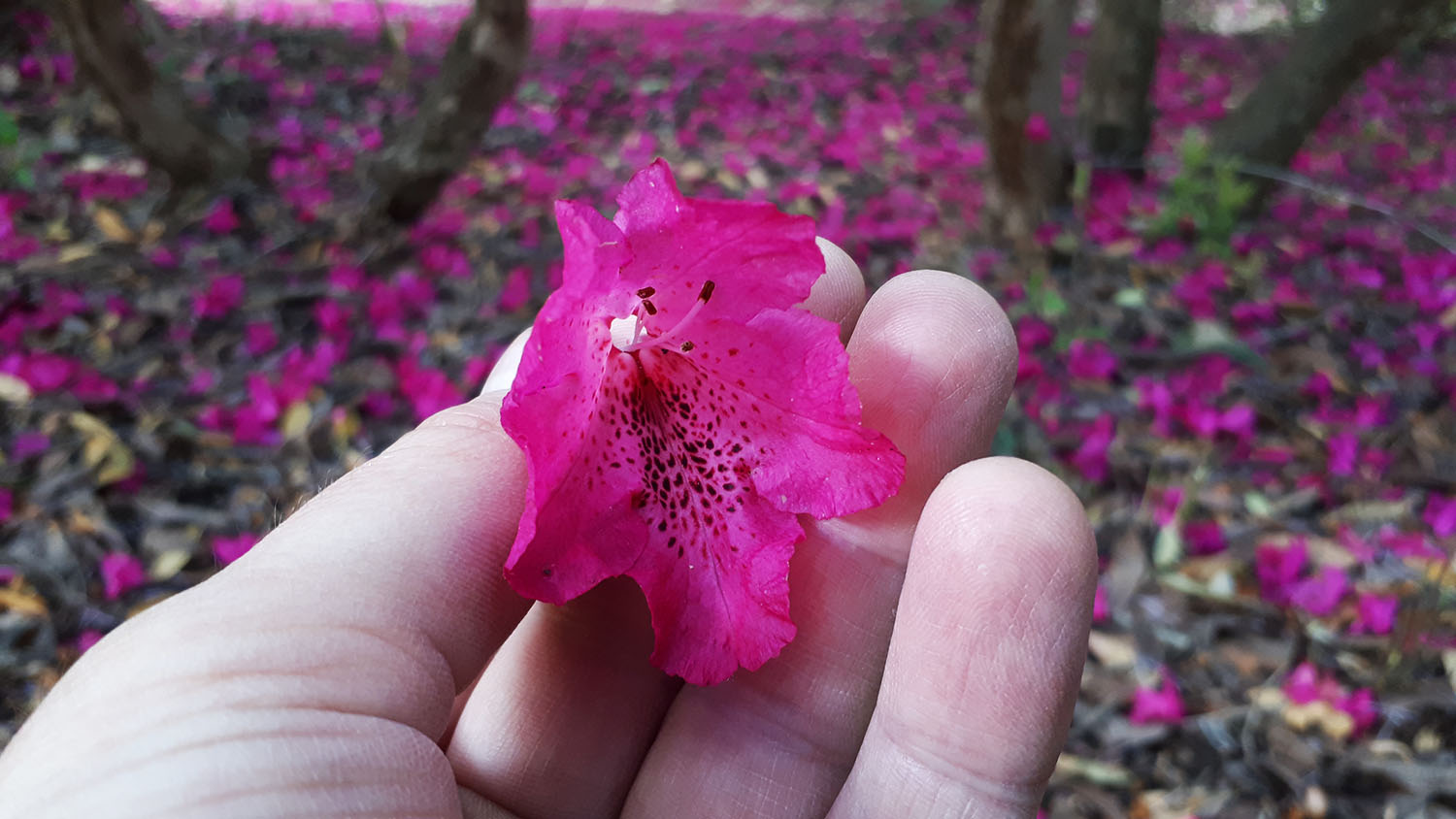 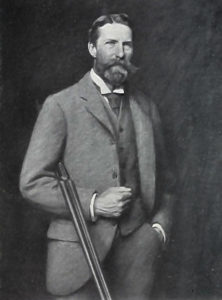 “All persons susceptible of sentiment know how the heart clings to the haunts of childhood; more especially does a child’s affection hold close a country home, for nature’s beauty appeals in a thousand ways to the fresh innocence and natural instincts of early youth. The High Beeches and the country around, where Loder’s childhood passed, became for him the one spot of earth beloved overall.”

Once at Leonardslee, Loder set about improving rhododendrons as garden plants by creating a new strain of hybrids. He acquired a fine collection of Himalayan species and sought out the very best Chinese species too, crossing them together. He also took pollen to use on Caucasicum Arboreum Catawbiense hybrids already in existence at the time. He went on to cross R Loderi, R Fortunei and R Griffithianum to produce R Kewense. In terms of the specific varieties growing at Leonardslee, R Loderi was very much rated as the best rhododendron of its time. Sir Edmund named many of the crosses he made:

“The variety most generally admired is King George and I have seen one truss with no fewer than 12 flowers”.
– Sir Alfred E Pease, 1922

Only a truly dedicated person tries to breed rhododendrons because hybrids don’t flower for years, the Himalayan species taking between 6 and 15 years to bloom! When Loder died, of those hybrids he had bred only 10% of those he had crossed had flowered! 200 were yet to bloom, he gave a generous gift to future generations, when you visit Leonardslee you are seeing Edmund Loder’s experiments all around you.

Sir Edmund Loder was very keen on shooting, as was common at the time. Each year he would join a shooting party of wealthy land owners and head up to Scotland or over into Austria and Hungary. One young man invited to join him was a Mr Charles ‘Ashburner’ Nix – a local man whose family owned the nearby Tilgate estate. Whilst shooting was the original reason for their shared time together Nix wrote that this evolved into alpine plant hunting together. Apparently Sir Edmund would take a trowel on shooting trips so that he could dig up plant specimens which infuriated the animal trackers who would say “that damn scratching has started up again!”. With their shared passion for botany, Loder would bring Nix plants.

“The plants came in very usefully and Sir Edmund’s keenness was a great spur to my botanical zeal“.
– Charles Nix, 1922

Charles Nix came from an estate well known itself for stunning azalea displays but clearly gained much from time spent on horticulture with Loder. Together with his brother John they spent time further developing the family’s Tilgate Estate and my Great Grandad George Cook spent his life working there as a gardener with them. I know that George was no ordinary gardener, he was very passionate about plants, especially fruit which was exhibited for the Nix family in London (Peaches, Pears, Figs and some more exotic produce). 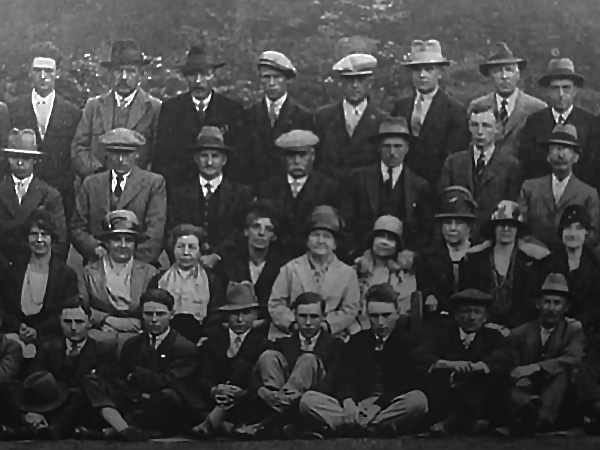 The Nix estate were early winners of the RHS Gordon Lennox cup award in 1922. My Great Grandad spoke fondly of these times working with the Nix family and ‘Mr Charlie Nix, who took over from his brother John”. I like to think that the horticultural influence of Loder on Charles Nix fed through to my Great Grandad too, for who could work with enthused horticulturalists without being touched by their ‘botanical zeal’. I’d be very surprised if Edmund Loder hadn’t visited Tilgate Park. Is it possible that Loder’s botanical influence on Charles Nix and Tilgate has in some small way trickled down through the generations to influence me today?Who knows? I’d certainly like to think so.

So impressed was I with Leonardslee during my GMG visit that I took MrsGrow back there two days later. She too was overwhelmed by the rock garden and as a graphic designer enjoyed the vibrancy of colours on display. This time I was able to explore a little further along the Leonardslee woodland trail, down to the hammer ponds (remnants from local iron forging days) which sit at the bottom of a bluebell lined valley. 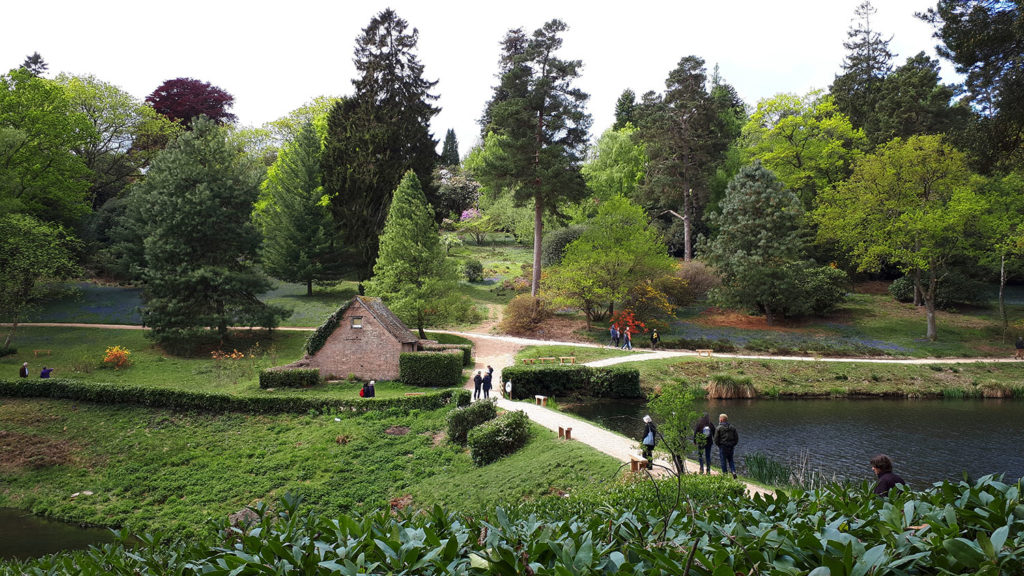 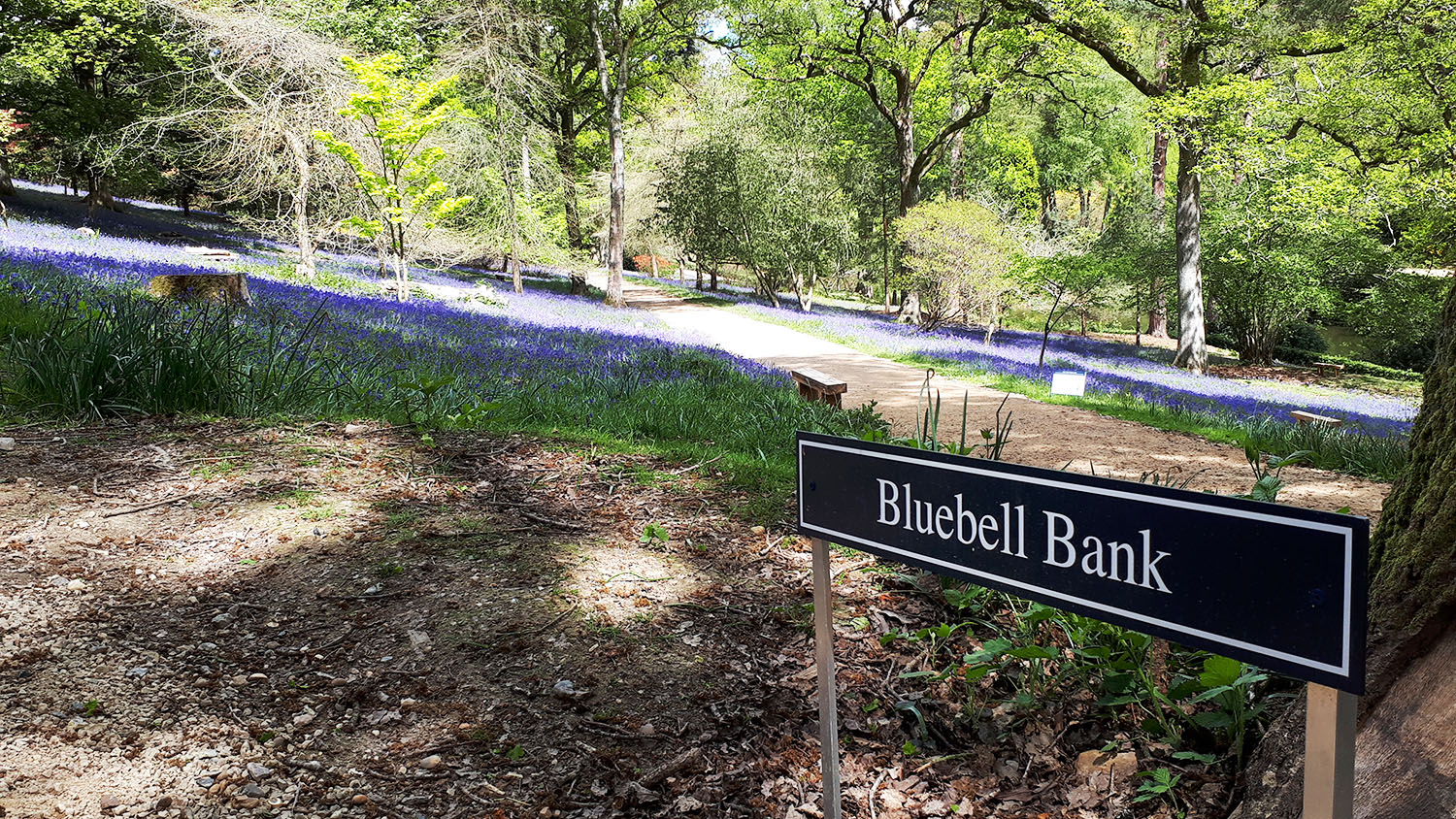 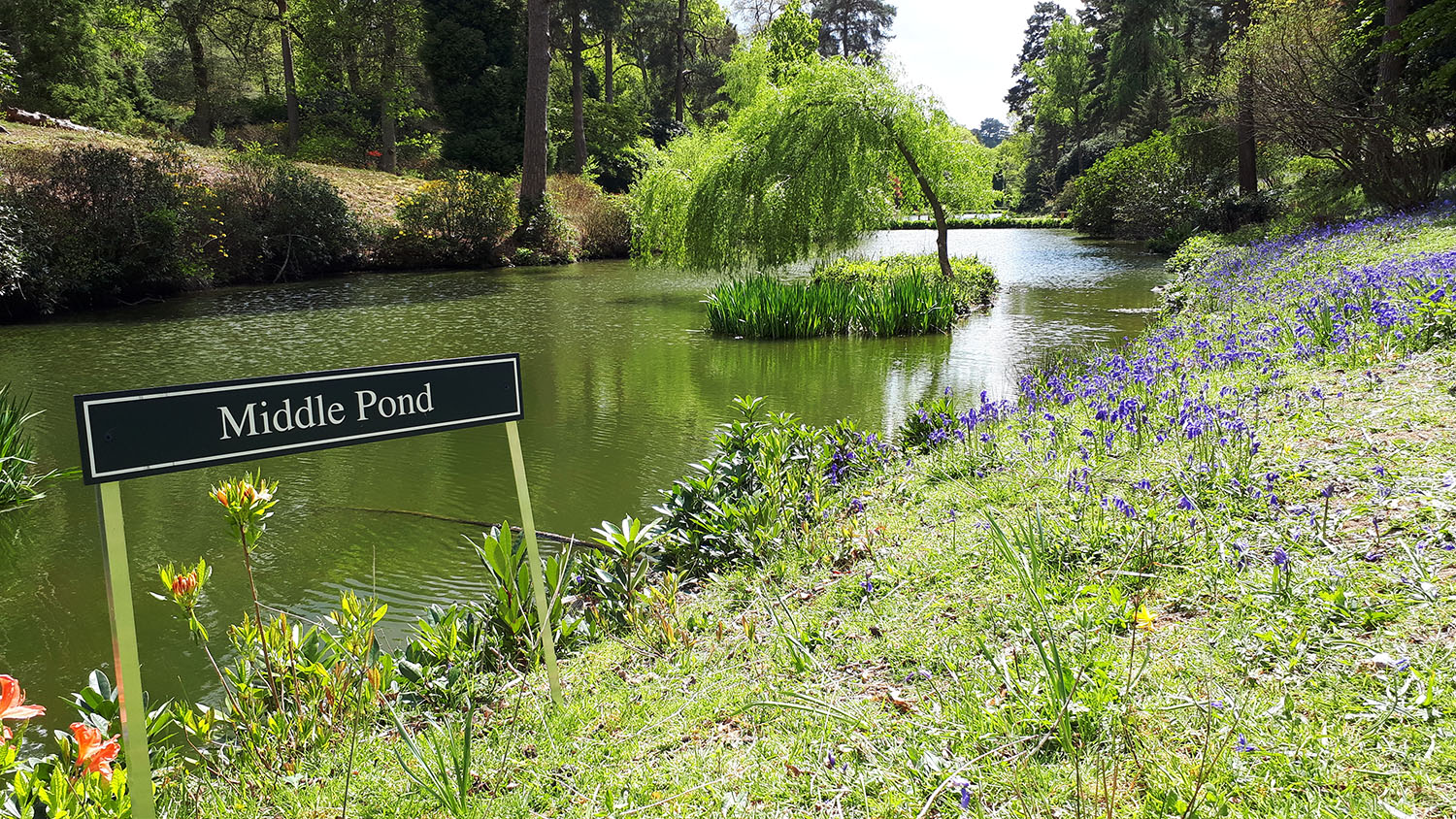 No sign of the Beavers or South American Capybara that once roamed there but a tranquil and enchanting valley of colour nonetheless, reminiscent of Coleton Fishacre and Stourhead (there I go drawing comparisons again). I can’t recommend a visit to Leonardslee highly enough and a visit will be written into annual May tradition from this point forwards.

On Loder and Leonardslee I leave you with the words of Charles Nix:

“I don’t think I ever knew Loder praise his own work – not even the garden at Leonardslee, which was his own creation and must always rank as one of the finest gardens in England, whether regarded from the artistic point of view or merely as a collection of trees and shrubs. It was his greatest work, and he could have left no better monument behind him to keep his memory fresh in the minds of his friends”