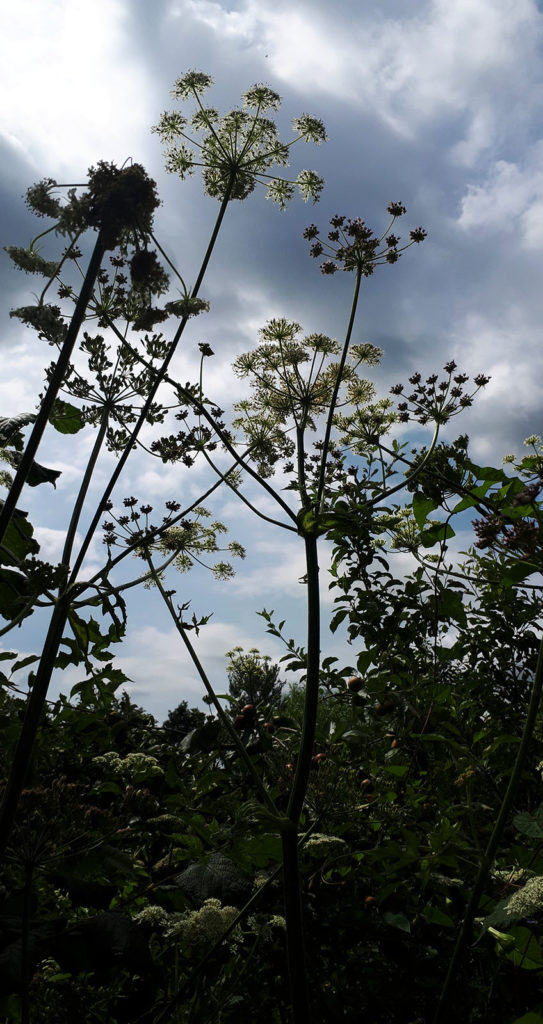 We’ve probably all heard the horror stories about severe skin burns from Giant Hogweed exposure (all Putin’s fault according to the Daily Express), but not many people realise that there are many other plants in the Apiaceae family capable of causing the same damage. At my allotment site earlier this year a fellow plot holder was quite badly burned after strimming her overgrown plot. I believe her arms and legs were exposed and as a consequence, when she cut through the weeds, she was covered in tiny bits of toxic sap which burned her skin. This was not caused by giant hogweed (as she first hypothesised) but by common hogweed which grows in abundance all over our allotments in Dorking. It grows quite large, sometimes up to eight feet tall with big thick stems, but not as tall as its giant cousin Heracleum mantegazzianum.

Most members of the Apiaceae / Umbelliferae family contain chemical compounds called furanocoumarins. These furanocoumarins have evolved to protect plants from insects, herbivores and fungal pathogens, even bacteria are destroyed 1. One key furanocoumarin found in the Heracleum genus of plants is called bergapten, a derivative of its parent psoralen, it is photo-activated. This means that when combined with sunlight, bergapten becomes activate and on contact with skin it damages the cells right down to the level of the DNA itself. Serious stuff, you can’t just wipe it off!

What damage can furanocoumarins do to skin?

At a basic level exposure to sap from an umbellifer causes phytophotodermatitis on the affected area, at its worst requiring hospitalisation. The effects can last for years afterwards especially when the affected area is again exposed to sunlight. At a more serious level it can contribute towards skin cancer through cell mutation.

Bizarrely plants containing furanocoumarins had been used for thousands of years to treat multiple skin conditions from psoriasis to eczema and vitiligo. Even up until 1996 psoralens like bergapten were being added to tanning oils to darken skin despite their photocarcinagenic properties. Modern science has thankfully found that such treatments increase risk of both melanoma and non-melanoma skin cancer through the disruption of DNA processes. 2

Which plants can cause phototoxic burns?

Some of the most common Apiaceae family members to avoid skin contact with include Ammi Majus – a popular selection for Monty Don at Longmeadow, and Angelica Sylvestris – a plant I found used by Tom Stuart-Smith on his RHS Bridgewater Garden at Chelsea Flower Show. In short, if it looks like an Umbellifer take extra care when cutting it. These plants all contain high levels of phototoxic compounds:

Furanocoumarins reside in all parts of the plant, from the roots to the stalk, leaves and even the seeds. A parsnip or hogweed plant that has gone to seed is to be treated with great care, don’t just brush past it or tackle it without long sleeves and gloves. 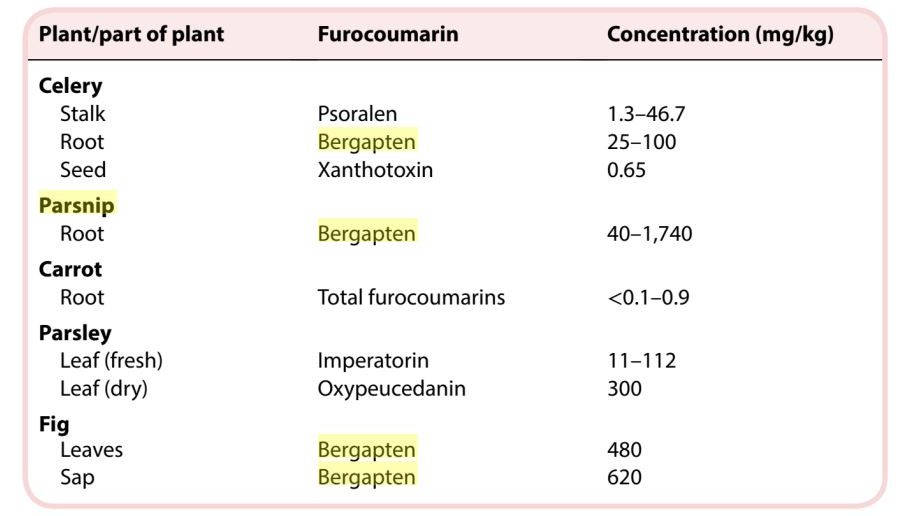 Obviously strimming plants at night when the risk of UV light is completely negated is an option… but probably offset by the increased risk of being outside with a dangerous tool in the dark and however many dodgy scaffolding boards reside on your plot as trip hazards (or maybe that’s just my allotment!).

Is it safe to ingest Furanocoumarins?

When you eat a plant containing furanocoumarins they are quite quickly distributed into the tissues of your body including the skin. In this article we are looking mainly at the Apiaceae family but the Rutaceae family also has its own phototoxic furanocoumarins – grapefruits, limes, lemons and bergamot oranges all have the ability to burn skin in sunlight. In the case of grapefruit juice, when consumed the compounds can even disrupt digestive enzymes and inhibit lifesaving medications from being absorbed into the body!

A parsnip root contains the following furanocoumarins: psoralen, bergapten, bergamottin, imperatorin, isobergapten, pimpinellin, sphondin, dimethoxypsoralen, angelicin. It is reported that organically grown parsnips (like those on your allotment) will in all likelihood contain higher levels of furanocoumarins than those grown by farmers 3. This is possibly because the plants naturally produce additional quantities of furanocoumarins when stressed to defend themselves from insect and fungal attack, whereas in a farmer’s field they might be treated with pesticides and not need to do so.

It is also reported that parsnips stored at room temperature continue producing furanocoumarins at a higher rate because they are stressed, than those that are refrigerated. 4 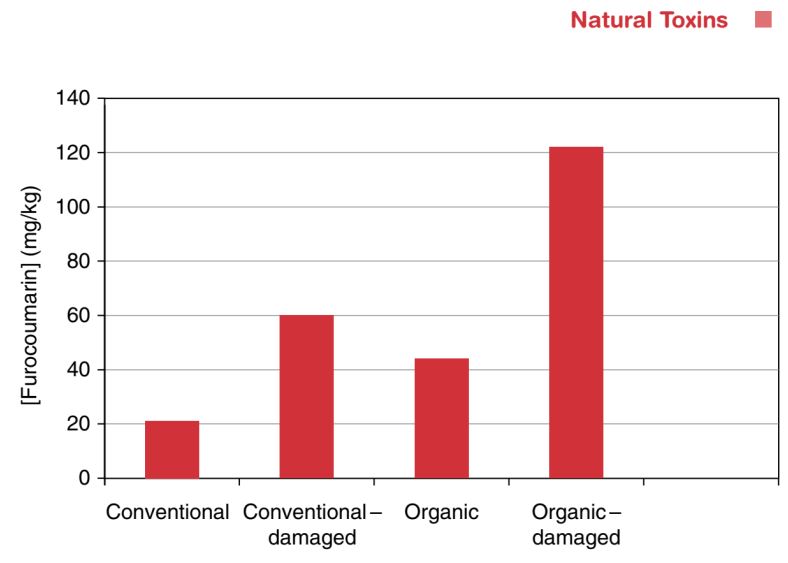 So is it safe to eat parsnips? Do we really need to ask that question? To quote the summary from the Food and Chemical Toxicology journal last year:

Furanocoumarins exhibit strong photoactivity, and in the presence of UV light are capable of intercalating with DNA, leading to phytophotodermatitis, genetic mutations, and carcinogenicity. Furanocoumarins are found in many common plant foods consumed by humans, and are known to be absorbed into the bloodstream rapidly following consumption. Exposure to furanocoumarins in large doses combined with UV radiation, such as through PUVA therapy, is known to induce skin tumorigeneses in both animals and humans. Recent epidemiological data suggest that relatively high levels of dietary exposure to furanocoumarins may also increase risk of skin cancer. Further research is needed to better understand the biological activities of dietary furanocoumarins, their relationship to skin cancer, and the patterns and dosages of furanocoumarins and UV exposure that are necessary to affect cancer risk.

Whilst more research is called for, I think we know enough to say that it’s probably not a good idea to live on a diet of organic celery, parnsips and grapefruit juice between daily visits to the solarium… but everything in moderation.  I am however rather glad that I’ve never been a fan of celery, parsnips or grapefruits anyway.